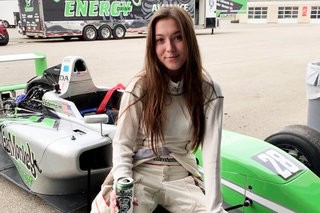 Most young kart racers have the dream of climbing the motorsports ladder and for Zoey Edenholm, a young female from Arizona, she is set to do just that. Inking a deal this week with the growing Alliance Racing Sponsored by Gas Monkey Energy outfit, the former karting champion and future female motorsports star is set to join the Indianapolis based team for the 2019 Formula 4 United States Championship Powered by Honda. Utilizing 2019 to get her feet wet, hone her skills and gain experience in the FIA sanctioned program, Edenholm will enter the series with support from multiple partners.

At only 17 years of age, Edenholm joins Ryan MacDermid, Chandler Horton, Will Edwards and Dylan Tavella at Alliance Racing. Determined to make a name for herself, focused on the top and looking for success, Edenholm is excited at the opportunity that was presented to her only a few months ago.

"I am excited to join Alliance Racing and the F4 program in 2019. They have a great group of guys with a ton of experience and an awesome partner in Gas Monkey Energy, and I hope I can bring value to the program both on and off the track," explained Edenholm. "Being out of a car for quite sometime, I understand that I have a daunting task before the season begins and onwards through the first few events but my goals are simple; progress when possible, keep the car out of trouble and help promote my partners to the best of my abilities."

"I was really impressed by Zoey and her feedback at a recent test that we completed at the MSR Houston facility," added Alliance Racing's Toney Edwards. "Zoey was off pace during the first day as she got back into the driving routine. During the second on track day, she decreased her lap time tremendously making great progress. I know that she will have several more days in the car before the first event, and we are very excited to have her in our program."

"It will be a big learning year for me," explained Edenholm, who will make her series debut at Road Atlanta in mid-April. "This is something that I want to do, and I want to be successful in motorsports. I can't thank Alliance Racing and Gas Monkey Energy enough for the amazing opportunity."

With the new program comes a new focus for Zoey Edenholm. Some very exciting programs are in the works and will be announced in the very near future along with her marketing partners.