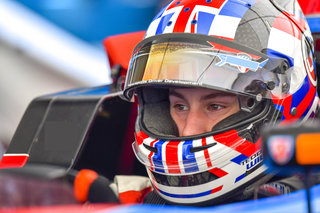 The opening rounds of the 2019 Formula 4 United States Championship Powered by Honda at Road Atlanta are less than a month away, and DC Autosport with Cape Motorsports is primed and ready to defend its driver championship.

Having scored the series title with Dakota Dickerson last year, team owner Don Conner has been busy testing drivers to put together his squad for the upcoming season. British talent Teddy Wlison will secure the first seat for the championship team. The 17-year-old finished seventh in the series last year as a rookie in his first year of car racing, scoring seven top-five finishes, including a pair of runner-up finishes at Virginia International Raceway and New Jersey Motorsports Park.

“I'm super excited to be able to put Teddy in one of our cars this year,” offered Conner. “He'll be a fantastic addition to the team, and I believe we can bring each other what we need to go after the 2019 F4 championship."

Ahead of his move to car racing in 2018, Wilson enjoyed a successful karting career that included titles in the MSA British Cadet Championship and impressive performances at the international level with factory teams like CRG and Energy.  The Englishman was on the sidelines for all of 2017 due to budget restraints, but a re-focus on American motorsports resulted in immediate success in the World Karting Association, as Teddy won the headline category at the organization’s annual Kartweek event at Daytona International Speedway in December, 2017.

This triumph set the tone for 2018 and Wilson’s first year in open wheel formula cars. Despite it being his rookie season in F4, Wilson was immediately up to speed and scored two poles and two podiums in his debut outing at Virginia International Raceway last April. The remainder of the season featured seven top-five finishes among 11 top-10 results.

“I'm really pleased to join DC Autosport and, with its proven track record, I'm confident we are going to be fighting for the championship,” Wilson added. “I can't wait to get the season started and I’m thankful for the opportunity that has arisen. The F4 US Championship has such a large field of competitive drivers and after my successful first season, I can't wait to get back out on track again.”

The first race of the season is just under a month away, as Wilson and DC Autosport will start the 2019 campaign at the 2.54-mile, 12-turn Road Atlanta on the April 18-20 weekend. The F4 series runs three races each weekend.