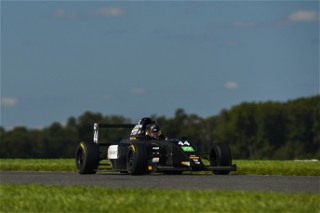 After a two-year hiatus, Group-A Racing’s David Porcelli made his return to racing during the fifth Formula 4 United States Championship Powered by Honda round an New Jersey Motorsports Park Sept. 14-16. Driving the No. 44 Group-A Racing/Turnkey/RaceCraft 1/Stuffed Burger machine, Porcelli charged his way to ninth place finish despite starting 26th, scoring points in his debut event.

“To say I am ecstatic for David would be an understatement” said team manager Jonathan Scarallo. “He’s worked incredibly hard to get back in a car and has worked hard all weekend to really do a fantastic job in the incredibly competitive field. Every session he’d come into debrief, taking in all the feedback, asking questions, studying everything with me, then go back out and improve every single session. The car was perfect off the trailer, we never made a single change all weekend, he just kept working, taking the 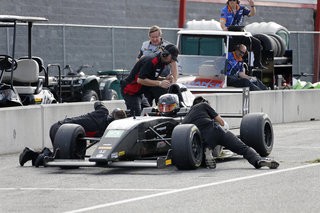 feedback on what to fix the next session and made constant improvement. I am really proud of him. To score points in this series is hard enough, let alone when you’ve never driven one of these cars, never been to the track and have not driven anything in over two years! Great job by him, and great job by everybody in this Group-A Racing team giving him the equipment he needed to just focus on his driving.”

The weekend started off with three much needed 30-minute practice sessions on Friday for Porcelli to familiarize himself with the new car. Mother nature caused havoc with rain from Hurricane Florence persisting throughout the day, causing mixed track conditions which didn’t allow Porcelli to test the car’s full capabilities.

Saturday morning qualifying presented the first proper conditions for Porcelli to properly sink his teeth into his Group-A Racing F4 U.S. machine with dry sunny conditions. The series newcomer put in a very good effort in his first effort back, qualifying 21st in the ultra-competitive 32-car field. The first race saw Porcelli cautiously move his way forward in the caution free affair, moving up three positions to finish 18th.

Sunday presented good weather again and the early morning second race saw Porcelli starting 20th.  Sadly, an early spin put him behind, but he managed to rebound to finish 23rd. In the final race of the weekend Porcelli started 26th, but quickly started moving forward. Passing an average of one car per lap, the New Jersey-native charged his way forward in his Group-A Racing machine to finish ninth in the final race of the weekend, just .027 of a second behind the eight-place finisher. It was a very emotional result for both Porcelli and his family, scoring points on debut, after the long period away from the cockpit of a car. 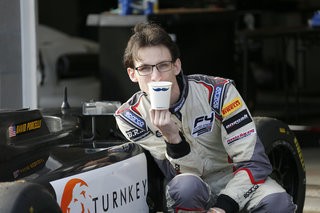 “This weekend at NJMP with Group-A Racing will certainly be one to remember,” said Porcelli. “Despite the weather conditions on Friday seriously hindering my practice time, I got up to pace quickly to compete with this massive field. Because I still needed practice heading in to qualifying and the first two races, I was aiming to acclimate myself to this car and track through those sessions to prove my level of talent in Race 3. Thanks to the hard work from Group-A Racing and the F4 U.S. Championship, I was able to display my capabilities and couldn’t be happier with my results. My first weekend back in a car in two years and I scored championship points with a true photo finish alongside P8 with just .027 seconds between us. I’ve returned home with the goal of putting together a season for 2019 to compete for the championship next year.”

While Group-A Racing has all its race seats filled for the remainder of the year the team has already aggressively started scheduling off season testing in preparation for the 2019 season. Drivers interested in testing with the team to race in 2019 can contact them via 631-974-4379 info@GroupARacingTeam.com.