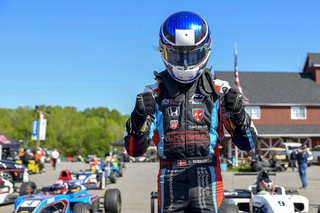 Christian Rasmussen of Copenhagen, Denmark, was in a league of his own during the last two rounds of the inaugural Andy Scriven Memorial Formula 4 United States Championship Powered by Honda race at Virginia International Raceway on Sunday, scoring his maiden victory in the U.S. during the morning session and repeating that success with another huge win on Sunday evening. The Jay Howard Driver Development rookie broke the track record in the second round (1:53.730 best lap) and then topped his own record in the closing race (1:53.073 best lap).

Dakota Dickerson of San Diego and Teddy Wilson of Holbeach, England, shared the podium with Rasmussen after both rounds. Dickerson finished in second place in Round 2 and captured third in the final race. Wilson secured a P3 finish in the first race of the day, and edged out Dickerson for second in Round 3.

“I am very pleased with how the weekend went,” said Rasmussen, the 2017 Denmark F4 overall third place champion. “Competing in the F4 program in Denmark gave me a great technical foundation and the set up that Jay Howard Driver Development prepared for this race helped me get to the front and stay there. We are looking forward to carrying over this success to Road Atlanta.”

In the closing round of the Andy Scriven Memorial weekend, the rookies dominated the front of the grid. Rasmussen started pole position with his JHDD teammate Wyatt Brichacek of Johnstown, Colorado, completing the front row. James Raven of Portsmouth, England, and JHDD driver Wilson started in Row 2. Series veterans started filling in the rows behind the new drivers with Dickerson grided on the inside of Row 3 and Jacob Loomis of Corinth, Texas, on the outside.

Rasmussen got the jump on Brichacek, immediately finding pace, pulling away from the pack. After just two laps, Rasmussen held more than a three second lead over second place. Averaging speeds of 103 miles per hour, Rasmussen finished the race nearly nine seconds ahead of Wilson.

Though Rasmussen’s top-podium position was never challenged, the fight for the last two steps went undecided right up to the checkered. For most of the race, P2-P5 were nose-to-tail. On the start, Raven secured second, but would fall to 16th early on after dropping off track. After a valiant fight back, complications sustained from the off-track excursion resulted in a DNF for the DEForce driver’s final round.

With Raven suddenly out of the picture, Brichacek, Wilson, Pedersen and Dickerson fought for position. Pedersen, who started seventh, charged to second after a battle between Dickerson and Wilson left Dickerson in the gray and Wilson losing pace. Dickerson fell back to fifth and Wilson was left to fight for third with his JHDD teammate Brichacek. Wilson shook his teammate to take third after Brichacek bobbled in Hogpen, falling to 16th. With three laps to go, Pedersen suffered a technical issue with the downshift, causing him to go wide in Oaktree. The grass the Global Racing Group pilot collected in the off-course excursion sucked up into the radiator, spiking his water temperatures. Managing the rising temperatures, Pedersen ended his fight for the podium to protect the integrity of his No. 24 DirtFish Rally car and Honda engine. He completed the race in fifth.

In pursuit for a second-place finish, Dickerson contested Wilson, but the 30-minute clock closed before Dickerson could make the final pass, so the DC Autosport with Cape Motorsports driver settled for third.

“The car was fast all weekend. We ended the event with great results, but I’m hungry for that win,” said Dickerson.

In Round 2, Dickerson also had troubles keeping pace with Rasmussen. Off the start, Dickerson charged to the front, stealing first from pole-sitter Wilson. Rasmussen hot in pursuit, continued gaining speed and before Lap 2, overtook Dickerson. Rasmussen continued to pull away, setting fast-lap of the session. After battling Rasmussen, Dickerson’s No. 9 Honda-powered machine kept pace and finished more than two seconds in front of Wilson. 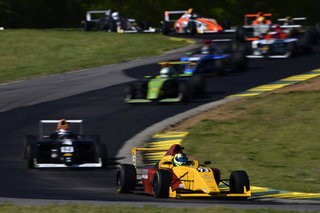 Cameron O’Conner of Johannesburg, South Africa, received the inaugural Sabelt Hard Charger Award for recovering 33 positions over the course of the weekend. Pedersen was honored with the Cameron Das Fast Qualifier Award presented by Worldeye after securing the fastest time in qualifying.

The F4 U.S. drivers return to Road Atlanta for the first time since its inaugural season May 10-12 with Formula Drift. For full race results and photos, fans can visit F4USChampionship.com.

PROVISIONAL Round 3 Results (final results have not been released)