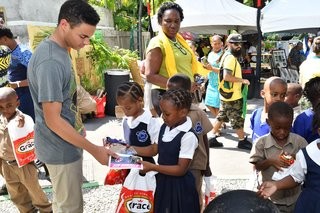 With his neon green and black tiger- striped Formula 4 United States Championship Powered by Honda car adorned with Bob Marley Foundation and Tuff Gong International studio decals, Justin Sirgany spread Marley’s ‘One Love’ message to the streets of his hometown in Kingston, Jamaica, in honor of what would have been Marley’s 73rd birthday.

Sirgany hosted dozens of children at the Bob Marley Museum for its annual Bob Marley Birthday Celebration. After delivering a few words of encouragement, Sirgany handed out mini diecast replicas of his car along with tiny decal packs so the kids could create their own livery.

“Using Bob Marley’s words as inspiration, I told the kids that their dreams will never come easy, what sets them apart is not giving up the fight for what they want. If it’s worth it, I explained to them 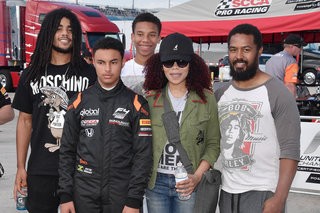 that they wouldn’t give up,” Sirgany said. “I wanted to inspire the kids to have dreams and go after them. It was humbling to celebrate the earthstrong of a legend and help carry on Marley’s message even 37 years after his passing.”

During the 2017 F4 U.S. season, the Bob Marley Foundation and Tuff Gong International, the recording studio Marley founded in 1965, sponsored Sirgany. The Marley family even made trips to some of the events to support their favorite Jamaican formula driver.