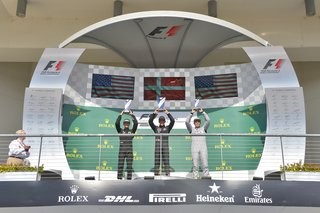 The Formula 4 United States Championship Powered by Honda drivers showed Austin, Texas, and the rest of the world how exciting junior-open wheel racing can be with an action-packed race from start to finish. Thousands of fans were on their feet cheering as Benjamin Pedersen of Copenhagen, Denmark, passed pole-sitter and F4 U.S. National Champion Kyle Kirkwood of Jupiter, Florida, for the lead in the final moments of the race. The cheers and gasps continued as Dakota Dickerson, who had chased Braden Eves of Gahanna, Ohio, for most of the round, made a calculated sling-shot pass on the inside to claim the last spot on the podium.

“The fan support here at COTA has been amazing. I could hear the fans cheering through my helmet over my Honda engine,” said Pederson, who has won three 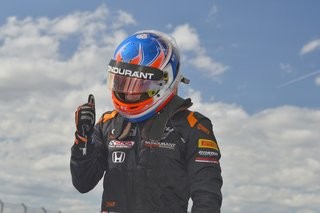 of the last four races at COTA. “To hear the Danish national anthem play after my win was amazing and to be on the top spot of the F1 podium was even better.”

Pedersen shared the front row with Kirkwood. Kirkwood’s car launched from the F1-style standing start like a rocket ship, leaving Pedersen to play catch up. The pair zoomed around the red, white and blue COTA corners, creating more than a second gap between Eves, Brendon Leitch of Invercargill, New Zealand, and Dickerson. Finally, the Global Racing Group driver wore down Kirkwood and made a pass on the outside of Turn 5. Pedersen held off advances from Kirkwood until he took the checkered.

“Pedersen raced me clean the entire race,” said Kirkwood. “He’s extremely calm and has been the best driver to race against in the championship.”

Dickerson, who started P5, was patient most of the race, waiting for Eves to wear the rubber off his Pirelli PZero tires. After passing his Kiwi Motorsport teammate Leitch, Eves was next on Dickerson’s hitlist. Eves defended his racing line as Dickerson tried multiple overtakes, but one wide turn in T20 from the Jay Howard Motorsports Driver Development driver left just enough room for Dickerson to whip inside on the penultimate lap. 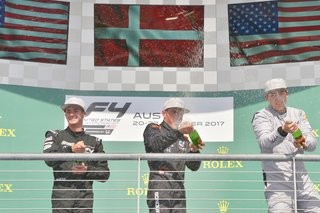 “I am so thankful for the opportunity that SCCA Pro Racing and F4 U.S. has given us,” Dickerson said. “Being on the F1 podium was unexpected and was a dream of mine my entire life. I will remember this moment forever and hopefully tomorrow the U.S. national anthem will be played as I collect my first win of the season."

The win from Pedersen jolted him from fifth place in the national championship to third, respectively. Unofficially, Forcier still holds second with Dickerson in fourth. Jordan Sherratt of Durban, South Africa, dropped to fifth in standings but only trails Pedersen by 12 points and Dickerson by two.

The F4 U.S. field returns to COTA tomorrow at 11:20 a.m. CT for the season finale. Full results can be viewed on F4USChampionship.com.