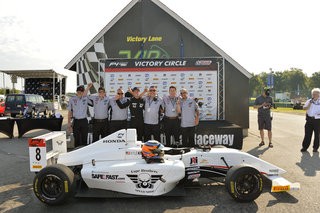 Cape Motorsports added to its impressive resume this year, winning both the Team and Driver titles in their first season of Formula 4 United States Championship Powered by Honda competition.  Cape Motorsports’ driver Kyle Kirkwood scored seven poles, eight wins and 13 podiums enroute to clinching the championship one event early, securing the crown with a second-place finish in the first race of the tripleheader Circuit of the Americas September 14-16. Series rookie Mathias Soler-Obel added points to the Team Championship effort, posting a total of 14 top-10 finishes as the crew heads into the final stop on the 2017 schedule at the Circuit of the Americas on the October 20-22 weekend.

"The first COTA weekend was all about securing the Driver’s Championship for Kyle, and the Team Championship for our guys, and we managed to accomplish our goals,” Dominic Cape enthused, speaking on behalf of his brother Nicholas and the entire Cape Motorsports staff.  “We are ecstatic to win the F4 Championship in our first go-round. There was some great racing in Texas with Kyle securing three podiums and Mathias having his best weekend so far this year. Steve (Bamford) had some great battles and did a solid job after missing the practice day due to business commitments. It was a fantastic weekend, and we’d both like to thank every member of our team for a brilliant season. It was a huge effort by everyone involved, truly awesome to be a part of."

It was truly a remarkable debut in F4 U.S. for the Cape Motorsports team and with new events in Austin scheduled to cap the year, they went into the penultimate event focused on capturing the two prestigious championship titles.  Kirkwood qualified third to begin the September COTA event, while Soler-Obel was a strong sixth, his best performance of the year. Canadian Steve Bamford’s need to miss the practice day put him behind the eight ball, and he qualified 31st to begin the weekend.

Kirkwood turned in a pair of tremendous performances in Friday’s pair of races, opening the tripleheader weekend with two podium finishes to clinch the championship over his nearest competitor. He ran a smart error-free race to second in the opening event, clinching the title in the process, and backed it up with a third in Race #2. Soler ran a strong sixth in the opening race, 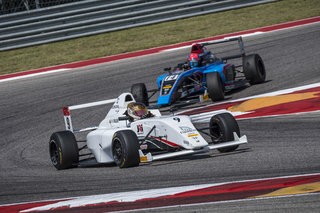 continuing his impressive development, turning the third fastest lap to move to the inside of Row 2 for Race #2.  Bamford advanced to 25th as he continued to get up to speed on the long 17-corner COTA layout, improving his time to start 25th in Race #2.  After starting third, Soler-Obel scored his second top-10 of the weekend on Friday afternoon, finishing seventh. Bamford was again on the move, taking another 25th place finish while dropping a full second off his fastest lap times to move to the 11th row for the start of the third and final race of the weekend on Saturday.

In Race 3, Kirkwood capped the weekend with another second-place finish, which coupled with Soler-Obel's sixth place result gave Cape Motorsports the overall 2017 Team Championship.  Soler finished in the top-10 in six of the last seven races and will look to finish the season strongly at the finale later this month.  Bamford ended his weekend with a 24th place finish.

The final stop on the F4 U.S. Championship schedule will take the team back to the Circuit of the Americas on the October 20-22 weekend, where they will run in support of the Formula 1 U.S. Grand Prix.