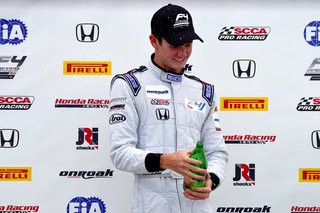 Kyle Kirkwood of Jupiter, Florida, dominated his sophomore season of the Formula 4 United States Championship Powered by Honda, clinching the season championship before the final event at Circuit of the Americas.

"It's an amazing feeling to take the championship before the last event,” Kirkwood said. “Cape Motorsports and I set that as or goal and we achieved just that.”

Kirkwood’s season didn’t start out as successful as its ending. After serving a 10-grid spot penalty in Rounds 1-3 for violating the pre-season testing rule, Kirkwood did not finish the season opener at Homestead Miami Speedway and barely completed the second two rounds in point position. However, driving the white No. 8 Cape Motorsports machine, Kirkwood rallied at Indianapolis Motor Speedway and Canadian Tire Motorsport park, consecutively sweeping the two events. His success carried through to Mid-Ohio Sports Car Course and Virginia International Raceway with two wins, two podiums and two top-10 finishes. During the penultimate event, Kirkwood took the podium three times and clinched the championship after the first round.

“Considering the start of the year, we had no clue it would end this way. Everything really did play in our favor” Kirkwood said. “Our consistency from weekend to weekend boosted us to from a 63-point deficit to a 142-point lead. Now we can relax for the last two rounds, take in the Formula 1 atmosphere and focus on the 2018 season.”

The successful season crescendo landed Kirkwood with a nomination for the Team USA Scholarship, more than $40,000 in cash winnings, 12 FIA Super License points to aid in his racing career advancement to F1 and an invitation to the F1 Prize Giving Ceremony in Europe.

Kirkwood and the other F4 U.S. competitors return to COTA Oct. 20-22 as the support series for the United States Grand Prix with F1. For a full list of standings and results, visit F4USChampionship.com.