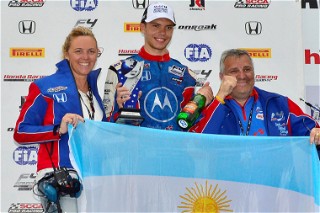 “I was brought up to believe being a good human being is the most important thing and human compassion is not separated by our borders,” Leguizamon said. “I talked to my family and we decided that we had to lead by example to aid those in need.”

Leguizamon pledged $2,350 to the relief efforts. The sum of Leguizamon’s earnings were from his first win at Virginia International Speedway, placing third at Canadian Tire Motorsport Park and receiving the JRi Shocks Hard Charger Award at Indianapolis Motor Speedway.

For fans who want to make a monetary donation, volunteer or give blood to the American Red Cross Disaster Relief Fund, visit RedCross.org.