Sherratt Charges to the Top of Standings after VIR; Kirkwood Extends Championship Lead 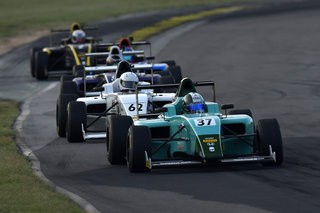 Kyle Kirkwood of Jupiter, Florida, continued to pull away in the Formula 4 United States Championship Powered by Honda standings after finalizing the Virginia International Raceway weekend with a win and two top-10 finishes. Kirkwood now leads second-place contender Raphael Forcier of Montreal by 91 points heading into the penultimate event at Circuit of the Americas where the Cape Motorsports driver can clinch the championship, respectively.

While Kirkwood has nearly secured his championship lead, second and third place are still in limbo. Jordan Sherratt of Durban, South Africa, stormed his way into the top-five after winning his first F4 U.S. Championship race at VIR, adding pressure to third-place Timo Reger of Houston. Sherratt, who is fourth in standings, trails Reger by just two points. The Crosslink Racing pilot’s run for the top began at Canadian Tire Motorsport Park after he charged his way from 15th to eighth place in standings, and his momentum continued at Mid-Ohio Sports Car Course with his first podium finish. Sherratt then captured his first win at VIR.

A tie for fifth between Jacob Loomis of Corinth, Texas, and Brendon Leitch of Invercargill, New Zealand, round out the top-five.

“The second half of the season has been very successful for my team, Crosslink Racing,” Sherratt said. “The whole year has been a total new learning experience for us. This is my first year competing in a car, so the more seat time I get, the more I learn and the better I get. After adding 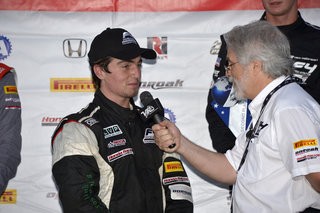 Danny Hunter to the Team at Event 3 in Canada, everything has just been falling into place perfectly. My goal for the rest of the season is to maximize my points in each race to make it into the top-three.”

Dakota Dickerson of San Diego added valuable points in his second F4 U.S. appearance. After two top-10 finishes at VIR, Dickerson sits just outside the top-five. Skylar Robinson of Augusta, Georgia, maintained his second-half of the season success with a podium and two top-10 finishes. The Momentum Motorsports driver remained eighth in points. Baltazar Leguizamon of Buenos Aires, Argentina, who lingered just outside the top-10 since mid-season, advanced to ninth place after scoring his first F4 U.S. win of his career.

John Paul Southern Jr. of Westlake, Ohio, and Benjamin Pedersen of Copenhagen, Denmark, experienced their best overall weekend of the season. The pair both finished in the top-10 in each of the three rounds. Series newcomer Tyler O’Conner of New Hartford, Connecticut, Austin Kaszuba of Burleson, Texas, and Mathis Soler-Obel of Bogota, Colombia, also earned points at VIR.

At the end of the season, the top-seven drivers are presented FIA Super License points to aid in their racing career advancement to Formula 1. The F4 U.S. Championship is the only junior racing series in the United States to offer its competitors Super License points.

The F4 U.S. Championship drivers are back in action for Rounds 16-18 at COTA Sept. 14-16. Fans can view full standings at by clicking here.