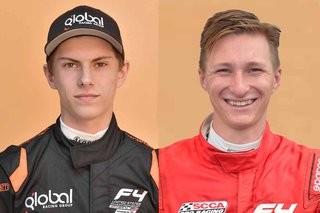 As a result of his experience in the Formula 4 United States Championship Powered by Honda, an exciting opportunity has emerged for Jacob Loomis of Corinth, Texas. The Global Racing Group driver will compete in the Team USA Scholarship Driver Shootout September 8-9 at M1 Concourse facility in Pontiac, Michigan. The two-day evaluation will be held in conjunction with the Lucas Oil School of Racing.

F4 U.S. series-newcomer and Sports Car Club of America champion, Elliot Finlayson of Yorkville, Illinois, was also invited to the shootout. Finlayson competed under Jay Howard’s Motorsports Driver Development at the last F4 U.S. event at Virginia International Raceway and will rejoin the team at Circuit of the Americas later this month.

Loomis, 17, and Finlayson, 21, along with four additional finalists, were chosen from a group of 10 nominated drivers. Two will win the ultimate prize to represent the United States in the 50th Anniversary of the Formula Ford Festival in Brands Hatch, England, October 21-22 and the opportunity to race for the Walter Hayes Trophy at Silverstone November 4-5.

“I’m honored to be selected as a finalist for the Team USA Scholarship Shootout,” Loomis said. “This wouldn’t be possible without the experience and exposure I gained from the F4 U.S. Championship and through my additional training from Global Racing Group.”

To be considered, drivers were nominated by someone within the racing community to undergo the first process of interviews held during the Honda Indy 200 at Mid-Ohio Sports Car Course in Lexington, Ohio, on July 30. Six finalists moved forward to the shootout, which will be held for the first time on M1's 1.5-mile Champion Motor Speedway road circuit. An elite judging panel will be confirmed in the coming days to evaluate the drivers on and off the track.

"Being part of the Team USA Scholarship is an amazing opportunity for any young American whose goal is to become a professional racing driver,” Finlayson said. “The program offers something to every candidate at all three stages. Being one of the six finalists is going to be another great opportunity. I'm excited to learn from some great individuals. I can't thank Jeremy Shaw, all the supporters of the Team USA Scholarship and the many judges for all they do to make this program such an amazing opportunity.”

Team USA alumnus Kyle Kirkwood of Jupiter, Florida, was selected last year for the prestigious award. Driving the red, white and blue patriotic Team USA Scholarship colors, Kirkwood placed top-10 in both the 2016 Formula Ford Festival and Walter Hayes Trophy. The F4 U.S. point-leader underwent the first round of the 2017 Team USA Scholarship selection process along with F4 U.S. veteran Konrad Czaczyk of Jupiter, Florida, but both were edged-out by the other competitors.

The Team USA Scholarship is one of the most successful and longest established driver development programs in the world. Almost a quarter of the drivers in this year’s Verizon IndyCar Series (five out of 21 full-season campaigners: Charlie Kimball, JR Hildebrand, Josef Newgarden, Conor Daly and Spencer Pigot), plus current sports car stand-outs Dane Cameron, Joel Miller, Joey Hand, Andy Lally, Bryan Sellers and Trent Hindman, are all Team USA alumni.

The overall winners of the scholarship will be announced at a later date following data analyzing from the weekend by Shaw and the other judges.