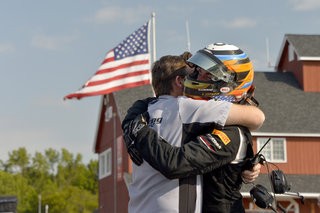 Kyle Kirkwood of Jupiter, Florida, seized his eighth victory of the season after making a calculated pass early on the first lap to claim the lead. Skylar Robinson of Augusta, Georgia, finished second and Jordan Sherratt of Durban, South Africa, closed out Event 5 with his third podium of the weekend.

“It was definitely a relief to get back on that top step after a pretty disappointing start to the weekend,” said Kirkwood, who lost first place positions in Race 1 and in Race 2 from faulting on turns. “Cape Motorsports and I took that negative energy from the first race day and turned it into motivation to push for the third race. It paid off.”

In the final round, wheel-spin from O’Connor on the standing start, allowed front-row starter Robinson 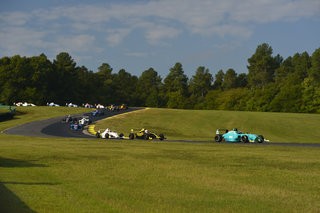 to go nose-to-nose with the series newcomer into Turn 1. Starting in P4, Kirkwood, got an excellent jump on the start over Sherratt to slide in behind Robinson and O’Connor. As O’Connor and Robinson rounded Turn 1 still battling for position, Kirkwood ducked to the inside with Sherratt on his gearbox. The pair worked their way past O’Connor and Robison by Turn 3, and by Turn 4, Sherrat, Robinson and O’Connor followed Kirkwood in single-file through the Left Hook.

The momentum from the top-five stalled after incidental contact between Austin Kaszuba of Burleson, Texas, and Moises de la Vara of Guadalajara caused an early full-course yellow.

On the restart, Sherratt put two wheels off into the dirt in Turn 3. Robinson capitalized on the error and quickly took second. Further down the field, Raphael Forcier of Montreal got the jump on O’Connor to take P5. Another full-course yellow emerged after Kent Vaccaro of Plattsburgh, New York, experienced mechanical failure in Turn 1, shunting him head-on into the tire wall. Driver and car extraction, debris clean-up and wall rebuild ran out the clock. The VIR finale ended anticlimactically under yellow.

Steve Bamford of Toronto earned the JRi Shocks Hard Charger Award after making 37 position changes throughout the three-round weekend. Bamford started last in each round at VIR due to penalties suffered from a race-weekend engine change. He turned his misfortune into a $500 payday.

The next stop for the F4 U.S. Championship is with the FIA World Endurance Championship at Circuit of the Americas in Austin, Texas, September 14-16 for the Lone Star le Mans. Fans can view full results at F4USChampionship.com.