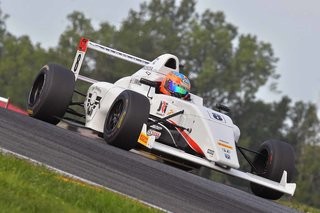 Cape Motorsports extended its point lead in the F4 US Championship Powered by Honda this past weekend at the Mid-Ohio Sports Car Course, when American Kyle Kirkwood won his seventh race of the season.  Kirkwood finished all three races of the tripleheader in the top-seven, and two of them on the podium during a weekend that saw a mixture of rain and sun. Rapidly drying track conditions in the opening round played a role in Kirkwood’s seventh-place finish, but the emerging star stormed back to a runner-up result in the full-wet Race 2 ahead of a dominant win in the dry final event. These consistent finishes pushed the 18-year-old out to a 75-point lead in the championship heading to the next event at Virginia International Raceway at the end of the m 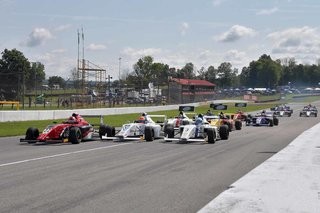 onth. Kirkwood’s teammate Mathias Soler-Obel fell victim to the tough conditions in Race 1 as well, and then focused on a putting in a quick lap in Race 2 to ensure a solid starting position for the finale. Starting eighth in Race 3, the 15-year-old Columbian advanced to sixth in the final results to gain his ninth top-10 of the season.

Kirkwood was quick out of the gate at Mid-Ohio, topping the official practice on Thursday with a lap of 1:25.997, which was almost a half-second clear of the competition.  The Jupiter, Florida resident piloted his Cape Motorsports #8 Crawford-Honda to the pole in Friday morning qualifying, rolling out a 1:26.018 in much cooler conditions, locking in the inside of the front row for the first of three 30-minute races.  Soler was 22nd in the first on-track session with a 1:27.825, and he would improve greatly in qualifying by shaving over a tenth off his practice time as others slowed down to sit 16th on the qualifying chart.

The first race of the weekend on the 2.258-mile, 13-turn natural terrain road course began in wet conditions, but the rain had stopped and the track began drying quickly.  Kirkwood was prepared to bolt away on the wet weather Pirelli rain tires, but spins by fellow competitors starting on slicks put off the actual start, which played to their advantage. The racing surface continued to dry 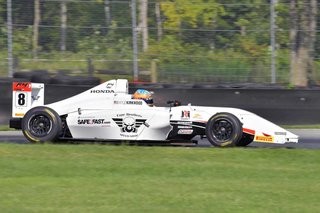 as the race waited to go green, and Kirkwood knew he was at a distinct disadvantage. Despite pulling away early, he was eventually reeled in by others as the track went to full dry with just a couple laps remaining.  Kirkwood soldiered on and finished eighth in the final tally, although the damage was also done in his lap times, as the grid for the second race is set by the fastest laps of Race 1. Drivers on slicks were able to lay down quick times, and Kirkwood found himself with only the eighth fastest lap of the race. The Cape team didn’t get off to the best start to the weekend, as Soler got caught up in an opening lap shunt, ending his race early.

The second race of the weekend was also run in the wet, and Kirkwood handled the opening lap well, starting from eighth.  He navigated his way through spinning competitors to lead the opening lap and held the position through entire race until the final lap, when a small error dropped him to second right before a full course yellow froze the field and ended the race. After his Race 1 DNF, Soler started at the tail of the field and was focused on posting a fast lap to advance up the grid for Race 3.  He accomplished this, setting the eighth quickest lap of the race, securing the outside of Row 4 for the final race.

In the weekend’s finale, Kirkwood was back on form and dominated from green to checker to score his seventh win of the year.  Soler had a strong outing as well, notching a good start to maintain his position in the top-10, coming home with an impressive sixth in the final tally.

The next stop on the F4 U.S. Championship schedule will take Cape Motorsports and its drivers to Virginia International Raceway on August 25-27, where they will join the IMSA WeatherTech SportsCar Championship.