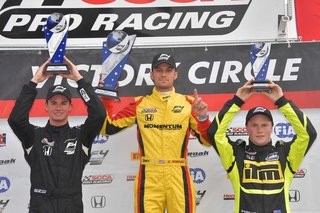 Mid-Ohio Sports Car Course set the stage for true Cinderella stories for the Formula 4 United States Championship Powered by Honda mid-season event. While Kyle Kirkwood of Jupiter, Florida, pulled away in the point championship, leading 75 points over new second-place holder Raphael Forcier of Montreal, competitors from the bottom of the standings rose to the top-10.

Skylar Robinson of Augusta, Georgia, ascended from nearly last place in standings to ninth place with his first win of the season, a top-five and a top-ten finish. Brendon Leitch of Invercargill, New Zealand, also had his best showing of the season at Mid-Ohio with three podium finishes, the most of any competitor of the weekend. Capturing a first, second and third place, shot the Kiwi Motorsport driver from 17th in standings to fifth.

“Winning in the wet at Mid-Ohio felt fantastic,” Leitch said. “I’m running down a dream here in the United States. The team is doing really well together. All of us are getting comfortable with the car and it's starting to show. Now on to VIR.”

After being closed-out in the final two rounds at Canadian Tire Motorsport Park, Forcier made a strong comeback in the mid-season event with a podium and two top-five finishes. The performance was good enough to take second place from Timo Reger of Houston.

“It’s really awesome to see our hard work pay off,” said Forcier. “We’re going to keep chasing first and with half the season to go, anything could happen.”

Jordan Sherratt of Durban, South Africa, who shot from 15th to eighth in standings after Rounds 7-9, continued to make gains at Mid-Ohio, sliding into sixth.

Justin Sirgany of Kingston, Jamaica, scored much-needed points with his first podium and highest top-ten finish of his F4 U.S campaign. The extra point-boost landed the Global Racing Group rookie just outside the top-ten in standings.

Primus Racing Team pilot Jim Goughary Jr. of Jupiter, Florida, ended his cold streak in Mid-Ohio earning a total of 14 points from his two top-10 finishes. After scoring points in 18 consecutive F4 U.S. rounds, Goughary hasn’t placed in the top-10 in standings since the 2017 season-opening event.

At the end of the season, the top-seven drivers will be presented FIA Super License points to aid in their racing career advancement to Formula 1. The F4 U.S. Championship is the only junior racing series in the United States to offer its competitors Super License points.

The F4 U.S. Championship teams are back in action for Rounds 13-15 at Virginia International Raceway August 25-27. Fans can view full standings at F4USChampionship.com.