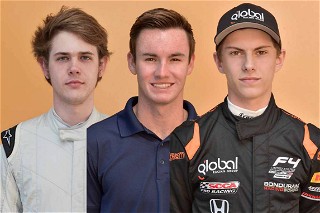 Three Formula 4 United States Championship Powered by Honda drivers have been selected as candidates for the 2017 Team USA Scholarship. In the first stage of the selection process, Konrad Czaczyk of Jupiter, Florida, Kyle Kirkwood of Jupiter, Florida, and Jacob Loomis of Corinth, Texas, along with seven additional candidates, will undergo a series of interviews conducted before a panel of judges this weekend during the Honda Indy 200 Verizon IndyCar Series event at Mid-Ohio Sports Car Course in Lexington, Ohio.

Ultimately, two winners will follow in the footsteps of a long line of accomplished professional drivers – headed by Jimmy Vasser and Bryan Herta who claimed the first two scholarships in 1990 and 1991, respectively – by gaining an opportunity to take part in some international auto racing events later this year.

The 2017 nomination will give Czaczyk and Kirkwood a second chance at the prestigious award. Czaczyk, who was nominated for the Team USA Scholarship in 2016, progressed through to the final round of candidates, but was edged-out by fellow F4 U.S. competitor Kirkwood. Kirkwood received one of two Team USA Scholarships, granting him entry into his first international race at the Formula Ford Festival in Brands Hatch, England, and the opportunity to compete for the Walter Hayes Trophy at Silverstone. The F4 U.S. points leader finished in the top-10 in both events.

Round-two finalists will be announced later this season.