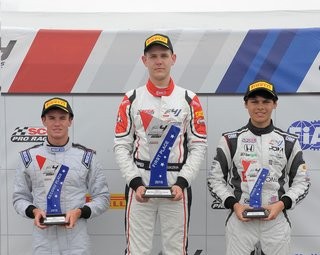 From doubling its grid size to announcing its first appearance alongside Formula 1 at the United States Grand Prix, the Formula 4 United States Championship Powered by Honda has experienced quite a year since its global racing inauguration one year ago at Mid-Ohio Sports Car Course.

“The cost-effective program that F4 U.S. represents is continuing to attract new customers to our Championship with sales that continue to be very strong,” said SCCA Pro Racing Vice President Steve Oseth. “The addition of F4 U.S. as a support race for Formula 1 at the Circuit of the Americas in October presents a huge bonus to those participating in our series.”

During its first year, F4 U.S. grew from 14 competitors to entering a total of 19 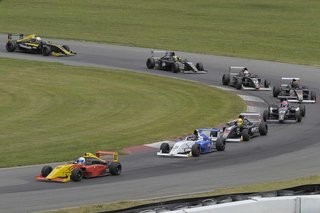 different drivers over the course of the season. Cameron Das of Baltimore was crowned the first F4 U.S. season champion with Konrad Czaczyk and Kyle Kirkwood, both of Jupiter, Florida, also earning spots on the championship podium. The trio would combine for 28 podium visits, 18 fast times and 14 of the 15 pole position starts. JDX Racing claimed the first F4 U.S. team championship.

In 2016, Czaczyk and Kirkwood were finalists for the Team USA Scholarship. Kirkwood received the prestigious award and represented the United States in the Formula Ford Festival in Brands Hatch, England, with the opportunity to race for the Walter Hayes Trophy at Silverstone.

“The competition here is really competitive,” Das said. “It’s been an easy transition for me from F4 to F3 with some minor challenges. F4 U.S. helped me improve my race craft and bridged the gap from karts to the higher downforce of the F3 cars. This series also uses Pirelli Tires which has made the learning curve a bit easier.”

Fast forwarding to 2017, the F4 U.S. announced an expanded seven-event, powerhouse schedule which included visiting some of the most prestigious open-wheel tracks in North America and joining legendary series like F1, IMSA, NASCAR, FIA WEC, TransAm and SVRA. 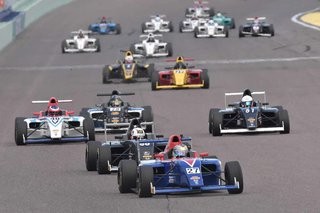 During its second season debut at Homestead-Miami Speedway, F4 U.S. fielded 33 cars, more than double its inaugural debut, and 32 cars, just one short of the Indianapolis 500 grid, participated at Indianapolis Motor Speedway in June. The series will make a trip across the border this week for its first international race at Canadian Tire Motorsports Park with a strong grid size of more than 30 cars. The final half of the season will see F4 U.S traveling to Mid-Ohio Sports Car Course, Virginia International Raceway and back-to-back visits to Circuit of the Americas.

“The future is quite exciting for F4 U.S.,” Oseth said. “A cost-effective series that enables drivers to accumulate FIA Super license points and huge, very competitive fields with strong series partners presents a very bright future for our championship.”

At the end of each season, the top seven eligible drivers are awarded FIA Super License Points to aid in their racing career advancement to Formula 1. The F4 U.S. Championship is the only professional, junior racing series in the United States to offer its competitors Super License Points.

The selected F4 U.S. powerplant is based on the engine currently used in the Civic® Type R®, detuned to meet FIA-mandated output of approximately 160 Hp. The engine and the ECU are sealed to help with parity and compliance.

The Crawford F4-16 chassis produced by Onroak Automotive’s North American manufacturing facility in Denver, North Carolina, is a modern, robust and highly capable chassis that is conducive to exceptional performance at various engine power levels. All chassis are equipped with JRi Shocks. Both the engine and chassis meet FIA homologation requirements.

New Formula 4 tires were developed specifically for junior single-seater racing by Pirelli engineers in Milan and incorporate learning from Pirelli’s participation in Formula One and feeder categories GP3 and GP2. Teams are allotted eight Pirelli PZero tires for each three-race weekend.

Video Summary of the Inaugural Race