Kyle Kirkwood Claws His Way to Second in Championship Standings 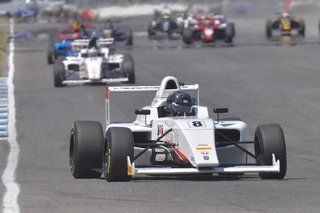 After the second Formula 4 United States Championship Powered by Honda event of the season, new names start to emerge in the Top-5 Championship standings.  With a string of three consecutive wins at Indianapolis Motor Speedway, Kyle Kirkwood of Jupiter, Florida, jolted from 14th to second in F4 U.S. Championship points, separating the Cape Motorsports driver from first-place Timo Reger of Houston, by just 14 points.

Raphael Forcier of Montreal, Jacob Loomis of Corinth, Texas, and series-newcomer Braden Eves of Gahanna, Ohio, round out the Top-5.

“Winning three races in Indianapolis was very unexpected,” said Kirkwood. “The team did an outstanding job on the set-up to give me a fast car. I was really fortunate to have moved up from 14th to second in points in just one weekend and want to carry this momentum into Canadian Tire Motorsports Park with the hopes of capturing first in points.”

Reger, who had great success in the season-opener at Homestead-Miami Speedway with two wins and a second-place finish, experienced a humbling weekend at Indianapolis. The JDX Racing rookie missed the podium in Round 4 after a last-lap shunt caused him to spin, resulting in a P23 finish. He did, however, set fast-lap allowing him to start pole position in the subsequent race. Reger wrapped-up his second F4 U.S. weekend with a second-place podium and a Top-10 finish.

“All weekend, we constantly worked on the car to make it better, but Kyle had the car to beat. He definitely had a great car all weekend,” Reger said. “Overall, IMS was slightly frustrating but I came home with another podium finish, 18 points and still hold the lead in the championship. My JDX team is going to push hard for Canada and I know we'll have a great car for the race."

Eves, who filled an empty seat for Jay Howard’s Motorsports Driver Development at IMS, wedged-out his spot in the F4 U.S. Championship standings after a successful weekend in his open-wheel debut. After securing two podiums and a fourth-place finish, the No. 41 pilot leads Ben Waddell of Denver by 11 points in fifth place heading into Event 3.

After two events, 20 of the 36 F4 U.S. Championship drivers have captured championship points. The Top-10 includes one tie for eighth place between Austin Kaszuba of Burleson, Texas, and Mathias Soler-Obel of Bogota, Colombia. Jim Goughary Jr. of Jupiter, Florida, caps-off 10th by a slim margin as a three-way tie for 11th between Baltazar Leguizamon of Buenos Aires, Argentina, Jack William Miller of Westfield, Indiana, and series-newcomer Flinn Lazier of Vail, Colorado, encroach on the veteran driver’s Top-10 standing.

F4 U.S. points are calculated based on FIA rules and regulations. The top 10 drivers in each race are awarded points as follows:

At the end of the season, the top seven eligible drivers will be awarded FIA Super License Points to aid in their racing career advancement to Formula 1. The F4 U.S. Championship is the only junior racing series in the United States to offer its competitors Super License Points.

The F4 U.S. Championship teams are back in action for Rounds 7-9 at Canadian Tire Motorsport Park July 8-9. To view full standings, click here.