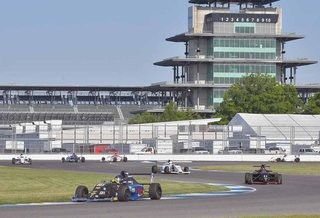 Teams started arriving at Indianapolis Motor Speedway in Speedway, Indiana around 6:30 a.m. The temperature was 84 degrees with 29 percent humidity.

7:45 a.m. Drivers attended a meeting reviewing race one material, on-track procedures, a schedule of events and a lighting demonstration.

The first morning test session began at 9:05 a.m and lasted 24 minutes. Thirty-one of the 32 F4 U.S. competitors tested. Lap times were not recorded for Max Peichel of Edina, Minnesota or for Lawson Nagel of Fort Worth, Texas due to faulty transponders. Parker Locke of San Antonio, Texas, experienced mechanical issued before finishing his first lap, resulting in no recorded lap time. Chris Gumprecht of Stanfordville, New York, did not participate in the first test. All drivers were required to practice one standing start before the conclusion of Session 1. Series newcomers Braden Eves of Gahanna, Ohio, and Flinn Lazier of Vail, Colorado, were required to complete two standing starts. John Andrew Entwistle of Katonah, New York, was also required to practice two starts after stalling in Homestead. No accidents needing yellow or red flags were involved during the test, however, Mathias Soler-Obel of Bogota, Colombia, retired to the pits after just two laps due to mechanical issues. Veteran F4 U.S. driver Baltazar Leguizamon of Buenos Aires, Argentina, finished the session with the best lap (1:31.220) with Eves finishing just eight thousandths of a second behind.

The second F4 U.S. testing session started after lunch at 2:46 p.m. Skylar Robinson of Augusta, Georgia, lost control of his No. 2 car going into Turn 3. In an unrelated incident in the same turn, Peichel also experienced an off-track excursion. A red flag was thrown and the session ended early as the two cars were assisted off the track. Peichel laid down the most laps (10) in Session 2 before ending his day. With a new pair of left-side tires, Kyle Kirkwood of Jupiter, Florida, found himself at the top of the time sheet with a fast time of 1:31.539. Once again, Eves finished in P2. Thirty of the 32 cars participated. Blake Mount of Denver suffered mechanical issues in the pits prior to the track going hot, resulting in no time recorded. Locke did not return to Session 2 due to previous issues from Session 1. Gumprecht did not participate.

Braden Eves, Jay Howard’s Motorsport Driver Development- The first session went well. I pitted and then went back out, changed a few things with my driving and gained some time. In our final practice, our pace was very good again. The car felt very good all day and I think we should have the pace for a win tomorrow.

Baltazar Leguizamon, Miller Vinatieri Leguizamon Motorsports- I had the fastest time during the first session. It is my first time running at Indianapolis Motor Speedway. The car continued to gain momentum throughout the day and I expect to have that same speed tomorrow during qualifying.

Kyle Kirkwood, Cape Motorsports- I put Homestead behind me, and I am ready take a win here in Indy tomorrow. My team has put together a fast car and I’m confident we can accomplish that.