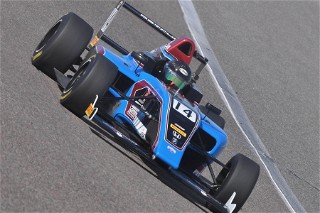 For the second consecutive year, the Formula 4 United States Championship Powered by Honda car will be on display at the Indianapolis Motor Speedway during Indianapolis 500 weekend.

Starting on Carb Day, the freshly wrapped, red, black and metallic blue No. 14 Jay Howard Motorsport Driver Development F4 U.S. Championship car will be on exhibit in the Honda Fan Zone, located in the Fan Midway inside IMS.

“Having my car displayed for hundreds of thousands of people to see is one of the most exciting feelings I’ve had in my racing career,” said Max Peichel, 15, pilot of the No. 14 F4 U.S. car. “One day I want to travel around the world racing, and F4 is the first step in fulfilling that dream.”

“The F4 car at Indy shows the depth and diversity of our open-wheel racing programs,” Honda Performance Development Commercial Motorsports manager Jeff Barrow said. “F4 is an affordable step into motorsports and what a perfect place to showcase that accessibility with other Honda-powered race cars at the center of speed during the Indy 500.”

HPD supplies all F4 U.S. Championship cars with Honda Civic Type R engines detuned to meet FIA-regulations. HPD offers teams like Jay Howard’s MDD the ability to lease engines with option to buy after the first year.  The objective is to make the F4 U.S. Championship an attainable and affordable race series with the competitor and race team in mind.

Spectators attending race weekend can take pictures by the Jay Howard MDD F4 U.S. Championship car on Friday from 9 a.m.-3:30 p.m., on Saturday from 10 a.m.-3:30 p.m. and on race day starting at 6 a.m. For fans unable to attend the festivities, follow live updates on Twitter (@F4Championship) or Instagram (@F4USChampionship). Photos from each day will be available on F4USChampionship.com.