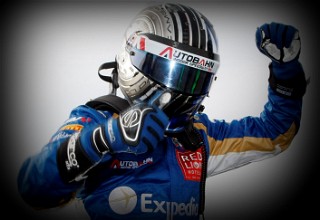 Following a strong day of testing on Friday, the 17-year-old stormed his way to claim his second F3 career pole position Saturday morning. He went on to finish the day with a podium position before carving his way through the field during Sunday morning’s reverse grid race to claim his maiden victory. Das rounded off his race weekend with a further podium position and points which closed the gap in the championship hunt.

“It feels really good to get my first win of the season,” said Das. “I knew that we had a strong car but I didn’t expect to get a win quite this soon in the season. I’ve managed to get in to the groove quickly and equally our preparation has been really good so I’m extremely pleased to be on the pace from the beginning of the year.”

Starting on pole for the first race, Das had a small amount of wheel spin which allowed his Carlin teammate Enaam Ahmed to catch Das in the opening corners. The pair eventually went side-by-side but it was Ahmed who took the lead and the win. Das followed the championship leader to cross over the finish line second.

Das lined up in seventh for the reverse grid in Race 2. When the lights extinguished, Das was extremely quick off the line. He avoided an incident and was soon in contention for the lead of the race. Taking his chance at the Deene hairpin, the Expedia 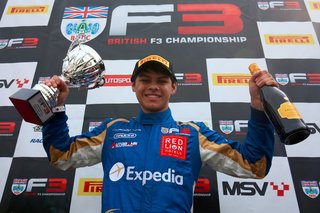 navy and yellow No. 28 Carlin pilot forced the issue and moved his way to the head of the field to take the lead. From then, it was a commanding display of speed and talent as Das pulled a gap claim his first win.

Starting from pole for the third and final race, Das held the advantage at the first corner however was squeezed at the hairpin as the cars ran three wide. This pushed him down to third, where he finished as the flag fell marking the end of an extremely successful weekend of racing.

“I want to add a huge thanks to my engineer Paul, my mechanics on the car and the rest of the Carlin crew for giving me another rapid car this weekend,” Das said. “Also, a big thanks to my sponsors Expedia, Autobahn Indoor Speedway and Red Lion Hotels for their continued support."

After two BRDC F3 events, Das is second in championship points with only 15 points separating him from the leader. Das took his first pole and a second-place podium during the first event at Oulton Park in Cheshire, England.

Das now has a slight break before the third round of the season takes place at Snetterton at the end of the May.