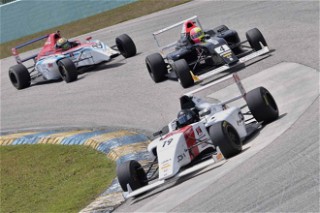 Austin Kaszuba of Burleson, Texas, Jim Goughary Jr. of Jupiter, Florida, and a tie between Jacob Loomis of Corinth, Texas, and Mathias Soler-Obel of Bogota, Colombia, round out a tight fight for top five. 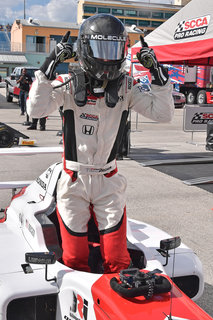 “Homestead-Miami Speedway was definitely a success,” said Reger. “Coming into the weekend, I knew the field was going to be stacked, but I was confident in the JDX Racing team. From the very first session, I knew we had a front-running car. Coming home with two wins, a second-place finish and the lead in the F4 Championship points, I’m super happy with how everything went down over the weekend. I need to give a special thanks to JDX Racing for putting a wicked-fast car under me.”

"With 15 races to go, there's obviously time for position changes, but I am really happy about my second place standings in points," said Forcier."I've worked quite a lot on both the mental and physical aspect of racing in the off season, spending a lot of time in the gym and always challenging myself on the sim. My team and I will keep pushing hard throughout the season."

Entered under his new single-car team Austin Kaszuba Racing, Kaszuba capped-off the season opener with a second-place podium finish, the best of his F4 U.S. career.

“I am happy with the results, but I am more pleased with the progression and momentum we were able to build as a team throughout the event,” Kaszuba said. We continually made gains improving the car.”

Inaugural third-place champion Kyle Kirkwood of Jupiter, Florida, battled to contend his spot at the top of the points standings, but after serving a 10-grid preseason testing penalty in each race and experiencing mechanical issues during the first round, the second-year driver found himself in the middle of the field trying to play catch-up. 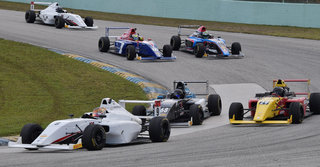 “Now that we’ve gotten through the mess with the penalties, I know Indianapolis in June will be a very different story,” Kirkwood said. “I have tons of confidence in Cape Motorsports, the Honda engine and my car. I’m excited!”

Thirty-three drivers participated in the first F4 U.S. Championship event with 14 putting points on the board. The top 10 includes two ties, one for fifth place, and a tie for sixth between second-year driver Benjamin Pedersen of Copenhagen, Denmark, and series newcomer Jack William Miller of Westfield, Indiana.

“We knew that the competition would be tight,” SCCA Pro Racing Vice-President Steve Oseth said. “With two ties and with just one point separating some of the standings, drivers are finding that every race is critical this season.”

F4 U.S. points are calculated based on FIA rules and regulations. The top 10 drivers in each race are awarded points as follows:

At the end of the season, the top seven eligible drivers will be awarded FIA Super License Points to aid in their racing career advancement to Formula One. The F4 U.S. Championship is the only junior racing series in the United States to offer its competitors super license points.

The F4 U.S. Championship teams are back in action for Rounds 4-6 at Indianapolis Motor Speedway June 10-12. Fans can view full point standings by clicking here.