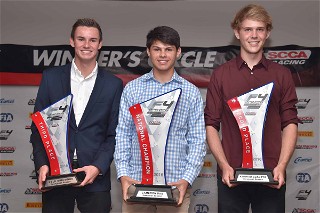 A total of $40,000 was presented to the season point champions of the inaugural Formula 4 United States Championship Powered by Honda during the season-end banquet at Homestead-Miami Speedway.

Das, 16, finished the opening season first in points, receiving the $25,000 grand prize. In addition to the cash prize and trophy, Das received an invitation to the FIA Prize-Giving Ceremony held in Vienna, Austria, in December. The FIA’s annual prize gala invites champions from every major branch of international motorsport to gather together to receive their official FIA awards. Das will be recognized alongside Formula One World Championship titleholders Lewis Hamilton and Sebastian Vettel along with additional F1 Championship contenders like Nico Rosberg.

“Being named a champion is unbelievable. It hasn’t set in yet,” Das said after the F4 U.S. banquet. “F4 U.S. leveled all of my driving skills and assisted with my media perspective. It made me a well-rounded athlete.”

Czaczyk, 19, placed second in the F4 U.S. points’ race. Czaczyk finished on the podium 10 times during the season, more than any other F4 U.S. competitor.

“Being on the inaugural F4 US Championship podium is a dream come true,” said Czaczyk. “I have learned more in F4 U.S. about racing than I have in my entire career. Second place is the culmination of hard work, determination and passion that not only I as a driver feel I possess, but that I've had the privilege to witness all season long working with all the talented people at Global Racing Group.”

Czaczyk was the first F4 U.S. driver to ever sweep an entire race weekend. During the F4 U.S. debut weekend at Mid-Ohio Sports Car Course in Lexington, Ohio, Czaczyk dominated the series event and won all three races.

Kirkwood, 17, rounded out the championship podium in third. Kirkwood was the first F4 U.S. competitor to start pole position and the only driver to have ever won an F4 U.S. round in the rain.

Kirkwood was congratulated at the year-end banquet as the most recent recipient of the Team USA Scholarship. Kirkwood will represent Team USA in the Formula Ford Festival in Brands Hatch, England, Oct. 21-23 and will also have the opportunity to race for the Walter Hayes Trophy at Silverstone, Nov. 4-6.

“The series has been amazing. The whole year has been amazing,” said Kirkwood. “This is the first time I’ve really driven a car with downforce, proper tires, a proper chassis and a proper engine. I can’t say enough good things about it. I am very proud to finish third. If it wasn’t for this series, I wouldn’t have received the Team U.S.A. Scholarship. I have to give a lot of the portion of me receiving this award to the F4 U.S. Championship."

The Colorado based race team JDX Racing was awarded the first F4 U.S. team championship. The team composed of drivers Das, Darren Keane of Boca Raton, Florida, and Blake Mount of Littleton, Colorado, and owned by  former professional driver and television color commentator Jeremy Dale visited the podium 10 out of the 15 rounds.

The F4 U.S. Championship team title was determined by the team that scored the highest number of points during the season. These points were assigned based on the results from the top two highest placing cars for each team at each event.

Crawford Composites’ Catherine Crawford presented Baltazar Leguizamon of Buenos Aires, Argentina, with the Catherine Crawford Most Improved Driver Award for his perseverance throughout the season. Leguizamon started the final weekend 13th in the points’ list and finished sixth after capturing his first two podium finishes at Homestead-Miami Speedway earlier that day.

“I was surprised when she called my name,” Leguizamon said. “We started the season a bit rough but made some changes. Then the results started to come.”

The FIA Super License is a qualification allowing the license-holder to compete in the Formula One World Championship. The license is issued to drivers who have met the FIA criteria of success in the junior motorsport categories. A competitor must obtain 40 points within a three-year period to apply for a Super License. Das, the points’ champion, received 12 Super License points. Subsequent positions earned between 10 and one point depending on their final placement.

The evening concluded with SCCA Pro Racing Vice President Steve Oseth announcing that the finalized 2017 F4 U.S. Championship season schedule will be announced at the Performance Racing Industry show in Indianapolis, in December.

Fans can view photos from the inaugural F4 U.S. Championship banquet on here.