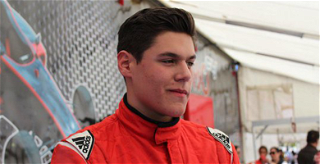 In many sports being tall has its advantages, but being 6’3 competing in Formula 4 is not one of those times. When Moises de la Vara, 18, hit a growth spurt before the Formula 4 NACAM season started, he found it difficult to fit in the driver’s cockpit comfortably.

“I have to drive without a seat now,” said de la Vara. “The engineers had to design a seat while still keeping within regulations around my legs so I would be safely secured in the car, but I still have to wear race shoes that are too small for me so I can maneuver the peddles.”

When de la Vara signed with Leading Edge Grand Prix for the inaugural Formula 4 United States Championship, his height woes did not fade. The F4 U.S. Championship Crawford Composite car is designed for the average sized teenager. De la Vara’s height is above average for his age and he is still growing.

“During long races or bumpy tracks, it can be hard on my back,” de la Vara said. “It’s worth every moment of pain though. I love this car and I’m glad to have the opportunity to race.”

De la Vara’s height and lack of seating has not decelerated his season. He joins the U.S. Championship grid from F4 NACAM based in Mexico where he is in the running for Rookie of the Year. He is only one of two drivers entered in the F4 U.S. Championship who has competed in an F4 car.

De la Vara will join the grid in the number 12 UAG Isla Navidad IEP car during his first race at Mid-Ohio Sports Car Course this Friday. With 13 turns, 2.25 miles of asphalt, a field full of fresh competitors and 30 minutes of racing action per event, de la Vara is not focusing on his equipment difficulties, but his season.

Want to know what super power de la Vara wishes he had or what snack he eats before each race, click here to learn more.