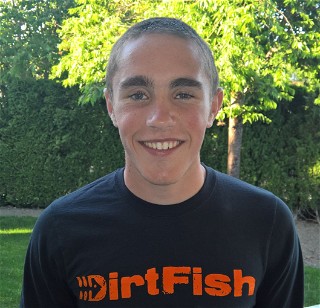 For 17-year-old Benjamin Pedersen of Seattle, Washington this coming summer will be anything but ordinary.

While most kids relish being able to turn off their alarms this time of year, Pedersen will instead be as busy as ever, competing for Leading Edge on the Formula 4 United States Championship series while also on the pitch playing soccer.

Pederson splits his time behind the wheel of a F4 U.S. Championship car and fielding a soccer ball as a left-midfielder and left defender on a youth academy level soccer team at Crossfire Premier Soccer Club in Redmond, Washington. The club competes on a national level, providing professional training and player development to students and has ties to FIFA, the governing body of association soccer, futsal and beach soccer.

“I attended my first race at eight weeks old, and was kicking a soccer ball around since I could walk,” said Pedersen. “I’ve always had a passion for both sports. They’ve always just went together.”

“Everything comes into play, whether I’m playing soccer or racing,” Pedersen said. “I use all five of my senses when I race. This really translated to soccer. Feeling for a defender, listening for footsteps behind me, seeing openings in the field to pass, these are all skills racing helped develop. Soccer has helped with my physical fitness, coordination and reflexes. These are huge advantages contributing to quick decision making to avoid contact and giving me the mental stability for a long race. The two sports together have made me a better athlete.”

Soccer and racing have laid the foundation for Pedersen’s athletic progress, however, there is a lot more to kicking a ball and turning a wheel the right direction. Pedersen has to meticulously schedule his days and choose what sacrifices he is willing to make to do what he loves. From long days at school, soccer practice and games, race training, driver brand development to volunteering within his community and studying, this fierce competitor has a lot to balance.

“I just simply follow my schedule,” said Pedersen. “I don’t have a lot of time to hang out with friends like a typical teenager, which can be hard at times, but I chose to do what I love. That’s important to me. The busier I am, the more effective I become.”

Pedersen plans on being effective on the race track in the F4 U.S. Championship beginning July 1-3 for the season opener at Mid-Ohio Sports Car Course in Lexington, Ohio.

Want to know what Pedersen is most looking forward to this season, his go-to cell phone app or what he likes to have in his hands, visit the #MeetMeMonday link here.