Experience the F4 U.S. Championship at the Greatest Spectacle in Racing 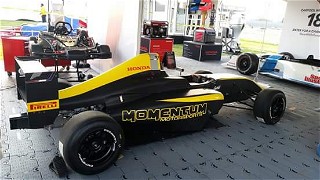 INDIANAPOLIS - The 100th running of the Indianapolis 500 is adding another first for open-wheel fans with the reveal of the Formula 4 United States Championship powered by Honda SCCA Pro Racing F4 car.

Starting on Friday during Miller Lite Carb Day, the freshly wrapped, black and yellow Momentum Motorsports F4 U.S. Championship car will be on display in the Honda Fan Zone, located in the Fan Midway inside the Indianapolis Motor Speedway.

“We’re excited to be part of such an important step in the development of young drivers,” said Jeff Barrow, Manager HPD Commercial Motorsports. “The F4 Honda engine will be the foundation for our future grassroots racing programs, and we’ve already seen how well it works during F4 tests.”

“Honda and SCCA Pro Racing have offered Momentum Motorsports a fantastic opportunity to share the new F4 U.S. car with the public before its debut weekend,” team manager Phil Picard Jr said. “I can’t imagine a more perfect place to reveal the F4 U.S. car than the Indy 500. Hundreds of thousands of fans are coming together to celebrate the 100th running, and Momentum Motorsports and the F4 U.S. Championship get to be part of that. Honda and SCCA Pro Racing have seriously made my year.”

The Indianapolis Motor Speedway is expecting more than 250,000 fans to attend the historic Indianapolis 500 on Sunday. Spectators attending race weekend can take pictures by the Momentum Motorsports F4 U.S. Championship car on Friday from 9 a.m.-3 p.m., on Saturday from 10 a.m.-3 p.m. and on race day starting at 6 a.m. For fans unable to attend the festivities, follow live updates on Twitter (@F4Championship, @MomentumMRacing) or view photos from each day on F4USChampionship.com.