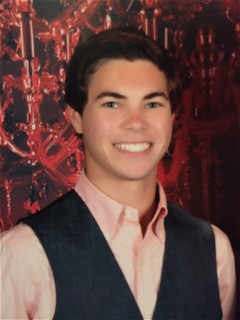 “I’m not intimidated but rather taken back sometimes by the knowledge that Scott and Jack have of the sport,” said the 19-year-old Formula 4 United States Championship driver. “I am grateful to have the opportunity to work with athletes who’ve been at the pinnacle of their sport, because that’s where I want to be some day.”

Kaszuba grew up at race tracks around the nation watching his dad work in IndyCar. Seeing his dad in-action created his desire to race.

“I don’t remember life without racing,” recalled Kaszuba. “Racing has always been a part of my family. Even when my dad gave me my first motorcycle at six, I knew I wanted to race it. Racing is just second nature.”

Before he was behind the open-wheel of an F4 car, Kaszuba had a passion for two-wheels. At age three he was riding his bicycle without training wheels and at six, Kaszuba traded in the aluminum frame for a motor and body kit.

At 10, Kaszuba started competitively racing dirt bikes. He quickly made the transition from two-wheels to four, when he received the chance to race Bandolero cars. He was successful in the series with several wins and top five finishes. When Kaszuba wasn’t racing cars, he was back in the mud racing dirt bikes.

In 2011, Kaszuba started racing in local and regional Motocross competitions. Even though he took many checkered flags competing in premier racing competitions, Kaszuba knew that his place was back behind a steering wheel.

As karting became Kaszuba’s primary focus, his first season in karts he won the North Texas Karter’s Championship and competed in the SKUSA Super Nationals, the largest go-kart race in the world. He took his second karting season by force finishing fourth in the Texas Lone Star Grand Prix, third in points in the Texas Prokart Challenge Championship and for the second season straight raced in the SKUSA Super Nationals.

“I’m very fortunate to have the opportunity to work with this high caliber of professionals so early in my career,” said Kaszuba. “I looked up to Scott as a kid and continue to as we go through this journey. To this day, I still have my matching Panther Racing, Scott Goodyear race car and transporter I played with growing up.”

If fans would like to learn more about Kaszuba, like what superstitious thing he does before each race, the last thing he snapped a photo of on his phone and the name of his childhood imaginary friend  click here. Fans can also follow Kaszuba's F4 U.S. Championship development on Instagram (@kaszuba34).