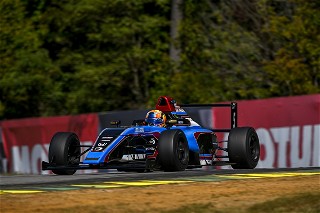 Eric Wisniewski Levels Up from Development Series to National Campaign

December 6, 2022 – With a handful of drivers already announced in other series, Eric Wisniewski is Jay Howard Driver Development’s first competitor confirmed for their 2023 F4 United States Championship Powered by Honda efforts. Making the move from the PMH Development Series that ran alongside select F4 events in 2023, Wisniewski will make his national debut when the green flag flies this coming season.

“Eric progressed well through the development series and gathered experience on several of the tracks that he will tackle for his 2023 campaign,” explained Team Owner Jay Howard. “While track time was key to ensure he was able to get up to speed last year, wheel-to-wheel racing experience will be on the docket for 2023 as he begins his open wheel racing career.”

“I am really excited to be back with Jay Howard and the whole Jay Howard Driver Development team for the 2023 season,” expressed Eric Wisniewski. “This last year has been super beneficial to me as I have gotten coaching from the team that has helped me get faster and faster each time I’m on track. I’m confident that with championship-winning cars and the best team to back me up we will be a front-running force in the 2023 F4 Championship. I can’t wait to see what we’ll be able to achieve!”

Coming from the Legend Car ranks, Wisniewski took last year to come to grips with the open-wheel Ligier JSF4 in the new PMH F4 Development program. Able to learn in a low stress environment on the same tracks during the same weekends as his F4 US Championship teammates, there was a ton of benefits for Eric as he set his sights on the 2023 season.

Howard continued, “Eric is entering our program at the right time. We are the defending series champions, and he has experienced drivers to lean on and learn from. I am confident that he will continue his upward trend.”