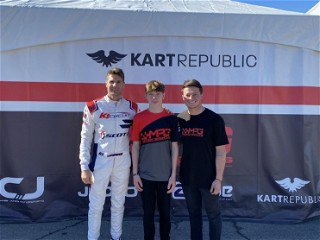 Nomination from Will Power Kart Secures Invite for Indiana Native to Drive an F4 U.S. Car

INDIANAPOLIS (November 23, 2022) – In just a few short weeks, some of the best karters from around the world will travel to Chandler, Ariz., for a joint venture between Radford Racing School and Formula 4 United States Championship Powered by Honda (F4 U.S.)—the Radford Racing School F4 U.S. Scholarship Award School. Designed to help drivers transition from karts to racecars, nominations are rolling in from the top karting programs around the world. The latest driver announced to the program is Austin Olds, a Terre Haute, Ind. native, who was nominated to the program by Will Power Kart.

“We’re delighted to have a driver from Will Power Kart included in the Radford Racing School F4 U.S. Scholarship Award School,” said Scott Goodyear. “It’s thrilling to see a champion like Will Power so involved in the grassroots level of motorsport, helping young drivers begin and build their careers. If Austin Olds caught the attention of Will Power, a two-time INDYCAR Series Champion, and Chase Jones, an accomplished racer in his own right, I am certain he will be an excellent addition to the program with Radford Racing School.”

"Karting is the purest form of motorsports,” said Will Power, the 2022 and 2014 INDYCAR Series Champion and owner of Will Power Kart. “To be able to tie the grassroots of racing into the higher level of motorsports is something I believe will benefit future drivers and motorsports as a whole. I am thankful to Scott Goodyear and F4 U.S. Championship for partnering with WPK to provide our drivers another avenue in motorsports."

Will Power Kart’s purpose is to offer a top-of-the-line chassis that serves as a stepping stone to help kids progress through the top levels of the motorsport ladder. Working in conjunction with Kart Republic, two unique chassis have been created to race under the Will Power name to take drivers through the junior and senior classes of karting.

“This is an incredible opportunity for us at Will Power Kart,” said Chase Jones, part owner of Will Power Kart and MPG Motorsports. “Radford Racing School and F4 U.S. Championship have been great to work with throughout this process. We are pleased to be able to select one of our team’s junior drivers each year to attend the winter test. For me, growing into a bigger role in motorsports and developing drivers has been a blast and an honor. I look forward to seeing our drivers grow into the next step of motorsports."

A third-generation racer, Austin Olds has been karting for more than half his life. Since competing in his first race in August 2014, the Indiana native has steadily climbed the go-kart ranks, while turning the heads of some of the most influential people in the sport.

"I am very thankful to the whole MPG Motorsports and Will Power Kart crew for providing me this incredible opportunity and experience,” said Austin Olds. “Without the belief in me from Chase Jones, Billy Vincent and Will Power, this would have never been possible. Thank you to Radford Racing School and the F4 U.S. Championship for putting together such a great program to give karters, like myself, an opportunity to experience the next step in motorsport. I cannot wait to see what we can do in the future!"

Scheduled for December 2-3, with an optional third lapping day on December 4, Radford Racing School’s F4 U.S. program is designed to help scholarship winners transition from karts to racecars. Nominated by some of the world’s best karting programs, scholarship recipients will travel to Radford’s facility to participate in the program that utilizes the same combination that F4 U.S. uses in competition—a Ligier JS F4-16 chassis, a Honda 2.0-liter engine and Hankook tires. With ground school, skid control, lead-follow sessions, braking, shifting and handling drills, the program is uniquely designed to account for the fact that participants are some of the top karters in the world.

Additional details about the school will be announced in the upcoming weeks.