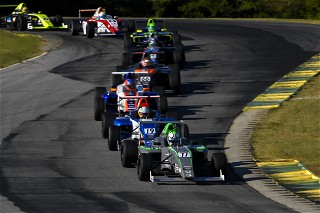 Season Coming Down to the Wire at VIR
Formula Regional Americas Championship Powered by Honda (FR Americas) and Formula 4 United States Championship Powered by Honda (F4 U.S.) are headed to VIRginia International Raceway (VIR) for the penultimate weekend of their 2022 seasons. Competing in Rounds 13, 14 and 15 of their 18-round championships, FR Americas and F4 U.S. will join the Sportscar Vintage Racing Association (SVRA), the Trans Am Series and International GT for an action-packed weekend at the Mission Foods VIR SpeedTour. Spectator gates will be open Thursday through Sunday, with tickets available at the gate or online at VIRnow.com.

Honoring and Remembering Andy Scriven
This weekend, FR Americas and F4 U.S. will honor the late Andy Scriven, chief designer at Ligier Automotive North America, and designer of the Ligier JS F4-16 and the Ligier JS F3. Scriven passed away in December 2017 due to complications from injuries sustained in a traffic accident while riding his bicycle.

Remembered as an avid reader, FR Americas and F4 U.S. will join Ligier Automotive in honoring Scriven with a book drive to benefit the Andy Scriven “Race to Reading” program. The program’s mission is to aid children in gaining access to books and developing an enthusiasm for reading.

Fans and competitors alike are invited to bring a new children’s book for donation to the program to VIR; collection bins will be placed at Winner’s Circle. The books will be distributed to pediatrician and optometrist offices by the Denver Lake Norman Rotary Club to borrow while receiving care, or even to take home following their appointment.

Meet the Drivers
Fans will have various opportunities to meet the drivers of FR Americas and F4 U.S. this weekend at VIR. In addition to roaming through the open paddocks, fans are invited to attend a pre-race fan walk leading into F4 U.S. Race 2 on Saturday afternoon. Scheduled to begin at 1:20 p.m., several drivers will be handing out swag in addition to complimentary FR Americas/F4 U.S. posters that will be given away.

Additionally, young fans are invited to attend Storytime with the VIR Kids Club where several FR Americas drivers will be reading books aloud in honor of the late Andy Scriven. Ligier Automotive North America will also be giving away a special coloring page and crayons to children in attendance. Storytime will take place on Saturday afternoon at 3 p.m. on the front porch of The Gallery.

Hughes Continues Toward Championship Bid
Lochie Hughes is on a roll with his No. 6 Jay Howard Driver Development (JHDD) / CSU One Cure / Lucas Oil / Pelican Ligier JS F4 team. Coming off back-to-back wins at NJMP, Hughes opened a 14-point lead over second-place Bryson Morris (No. 39 Crosslink Kiwi Motorsport Ligier JS F4). Morris continues to put up a good fight with six consecutive podium finishes—the longest streak of any F4 U.S. driver this season. Likewise, Morris’ teammate, Ryan Shehan (No. 66 Crosslink Kiwi Motorsport Ligier JS F4), has been making up ground, moving from sixth to fourth in the standings during the championship’s most recent event. The Texas native also earned his first F4 U.S. win in Race 1 at NJMP. Velocity Racing Development (VRD) teammates Noah Ping (No. 65 VRD Ligier JS F4) and Matt Christensen (No. 45 VRD Ligier JS F4) round out the top five in the driver’s standings, ranking third and fifth, respectively. The winner of the 2022 F4 U.S. Championship will earn a scholarship to compete in FR Americas in 2023.

The Benefit of Experience at VIR
While over half the field will see VIR for the first time in their career this weekend, six F4 U.S. drivers will enter the weekend with the benefit of experience. In last year’s F4 U.S. competition, Louka St-Jean (No. 98 JHDD / CSU One Cure / Lucas Oil / Pelican Ligier JS F4) earned the pole in Race 2, while Ryan Shehan started from the point position in Race 3 at the 3.27-mile road course. None of this year’s F4 U.S. drivers earned podiums at VIR last season; however, a fourth-place effort was matched by three drivers with Louka St-Jean, Matt Christensen and Bryson Morris each taking a checkered flag in the fourth position. Gabriel Fonseca (No. 76 Crosslink Kiwi Motorsport Ligier JS F4) has three F4 U.S. starts at VIR, including two top-10 finishes. Rookie Alex Berg (No. 08 Penn Elcom / Lordco / Cedar Coast / Kirby Studio / L.A. Prep Ligier JS F4) made his first start at VIR in March with Spec MX-5 Challenge, where his two starts yielded two pole positions and one race win.

Welcome Daniel Cará and Cará Origin Motorsports
Daniel Cará will make his F4 U.S. debut this weekend at VIR with his family-owned team Cará Origin Motorsports driving the No. 10 Tenuta Foppa / Ambrosi Wines Ligier JS F4. The Brazilian, who resides in The Woodlands, Texas, has seven years karting experience, and will make the transition from shifter karts to cars when the lights go out at VIR.

Home Race for Tyke Durst
Tyke Durst (No. 17 Gonella Racing Ligier JS F4) will have the advantage of the home crowd this weekend at VIR. While currently enrolled in the Mechanical Engineering program at the University of North Carolina at Charlotte, Durst’s home address is in Cary, N.C.—just 65 miles from VIR. The 19-year-old will have a large contingent of friends and family at the track this weekend, including guests from Drive Toward a Cure, the 501(c)(3) nonprofit that Durst has partnered with to raise funds and awareness for Parkinson’s Disease.

Notably, championship points leader Raoul Hyman and series newcomer Oliver Westling will be visiting VIR for the first time in their careers this weekend.

Westling Advances to FR Americas
Oliver Westling will make his FR Americas debut at VIR this weekend driving the No. 1 Jensen Global Advisors Ligier JS F3. A regular in F4 U.S. competition this season, Westling began testing a Ligier JS F3 car shortly after the Road America SpeedTour weekend in May. After several successful tests, the California native looks to get a jump on his 2023 season, when he plans to compete full time in FR Americas with JENSEN.