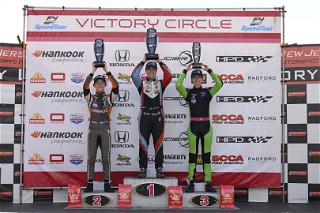 MILLVILLE, N.J. (July 31, 2022) – Lochie Hughes strengthened his points lead with his fourth Formula 4 United States Championship Powered by Honda (F4 U.S.) victory of the 2022 season to close out the New Jersey SpeedTour event at New Jersey Motorsports Park (NJMP). Despite a highly-competitive field, Hughes led every lap on track this weekend, but was credited with only two wins after his victory in Race 1 was recalled due to a stewards’ decision.

“It was very tough out there,” said Hughes after climbing from his car. “This place is hard on tires, and that was the first time we used a set of tires that had already done a race. It was really difficult. Happy to bring it home for the win. It was tough at the start; Ryan [Shehan] was all over me. Then, it was red flagged and we had to do a safety car restart. I just reset, put my head down and did the job.”

Berg, Morris and Fonseca found themselves volleying positions, but contact ultimately removed Fonseca from the fight. Meanwhile, Berg and Morris continued to swap the third position until the halfway mark, which is when Ping inserted himself in the battle. Ping ultimately overtook Berg to secure the fourth position, but wasn’t able to make it to the third position before the checkered flag waved.

As they crossed the line, it was Hughes in the lead by 0.914-second, followed by Shehan, Morris, Ping and Berg. Crosslink Kiwi Motorsport teammates Shehan and Morris had perfect podium weekends, each making three podium appearances at NJMP.

For his efforts at the New Jersey SpeedTour event, Hughes was awarded the Omologato Perfectly-Timed Move of the Race, which earned him a bespoke Omologato timepiece embossed with F4 U.S. branding.

A full run-down of the provisional results from Race 3 are available here.

F4 U.S. will be back on track October 6-9 for the Andy Scriven Memorial at the Mission Foods VIR SpeedTour. Tickets for the event are available now at VIRnow.com. To watch a video production of this weekend’s races, subscribe to SpeedTourTV on YouTube, click the bell icon to turn on notifications and receive an alert when new content is posted.