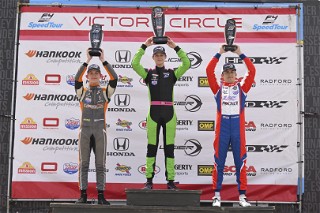 Polesitter Andre Castro (No. 8 Future Star Racing Ligier JS F4) rolled off first, but was quickly overtaken with Morris on the outside and Matt Christensen (No. 45 Velocity Racing Development Ligier JS F4) pulling to the inside as the field came into Turn 1. After a clean start, a bit of chaos ensued in Turn 2 with Lochie Hughes (No. 6 Jay Howard Driver Development / CSU One Cure / Lucas Oil / Pelican Ligier JS F4) and Oliver Westling (No. 2 Jensen Global Advisors Ligier JS F4) spinning in front of the field. With dirt and dust obstructing their view, the back half of the field took evasive action before they pulled down pit road under red-flag conditions.

With nearly 20 minutes left, the race resumed. Morris had a clean start and pulled away from the field, while Christensen and Ryan Shehan (No. 66 Crosslink Kiwi Motorsports) battled side-by-side. Shehan secured the second position going through the Keyhole and got settled into his rhythm.

The leaderboard got shaken up once again with another safety car period and less than nine minutes left on the clock. While running third, Christensen made heavy impact with the wall coming off the Keyhole. The incident moved Castro back to third, Gabriel Fonseca (No. 76 Crosslink Kiwi Motorsport Ligier JS F4) to fourth and Alex Berg (No. 08 Doran-Kroll Competition Ligier JS F4) to fifth. Berg set the fast lap of the race to secure the pole for Race 2 tomorrow.

With the clock running out, the safety car led the field to the checkered flag, and Morris to the win. Shehan was scored second, and Castro secured the third step on the podium in his first F4 U.S. start.

F4 U.S. returns to the track tomorrow for Race 2 at 9 a.m. ET, followed by Race 3 at 3:25 p.m. ET.  Both races will be available for live streaming on the SpeedTour TV’s YouTube page at YouTube.com/SpeedTourTV.