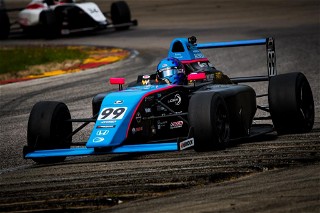 The second event for the Formula 4 United States Championship Powered by Honda at Road America proved to be a tale of two halves for rising star driver Emily Linscott.

A rare test day earlier in the week had the talented teen rock up with true front-running pace as she delighted on the high-speed layout of Blackhawk Farms Circuit, paving the way for a return to her favorite circuit of Road America, where she had previously posted her first Official Pole Position in race cars two years prior.

After posting ninth fastest in practice, Linscott, in the No. 99 Kiwi Motorsport car, had her sights set on her first top 10 qualifying position of the season. Bad luck struck with a mechanical failure beyond her control removing her from the qualifying session after only three laps, putting her down in 22nd on the starting gird for Race 1, with 27 drivers lining up.

Race 1 was a unique affair, with just a single green flag lap of racing completed. Linscott posted 13th fastest lap in that single tour which would have put her in 13th place starting race two. However, the race was deemed a non-race due to the lack of racing laps, forcing Linscott to start Race 2 back down in the same position as Race 1.

Sunday’s Race 2 proved almost as challenging, with a multi-car incident on lap one bringing out full-course yellow flags followed by a red. The restart was a four-lap dash to the Checkered flag, with Linscott overtaking her way to 16th, posting the 14th fastest lap, earning her a starting position of 14th for Race 3. She was later promoted one place to 13th after another driver received a penalty.

In Race 3, Linscott made her presence known by moving up a place each of the first two laps to 11th, where she was lining up 10th and 9th respectively. Exiting the final turn onto the front straight, one of the cars ahead of her spun, she took evasive action to avoid a collision but was collected by another driver who was also trying to avoid the incident, ending her day prematurely.

Linscott was philosophical about her difficult weekend, “If I didn’t have bad luck this weekend, I’m not sure I’d have any! With two mechanical failures throughout the course of practice and qualifying, mixed with getting caught up in an unavoidable crash, I didn’t get the top ten results I was expecting to. Looking at the positives, I showed I have the pace to run inside the top third of the grid and I learnt a hell of a lot, so I’ll be able to take this into round 3 at Mid-Ohio.”

Linscott will head to Mid-Ohio Sports Car Course on June 25-27 for round 3 of the F4 United States Championship Powered by Honda.