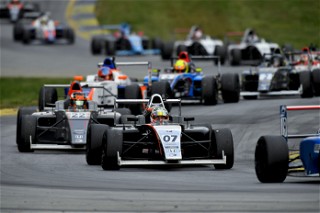 With the first event at the Michelin Raceway Road Atlanta now behind them, Kiwi Motorsport is making the trek north to Road America. Bringing five drivers to this weekend’s F4 United States Championship Powered by Honda event weekend, Kiwi Motorsport will enter podium winners as well as a new driver in rounds four, five and six.

Arias Deukmedjian will lead the five-driver lineup into Elkhart Lake, Wisconsin on the strength of two third place podium results in Atlanta. Showing great speed, poise, and race craft, Deukmedjian will be looking to increase his podium haul as he currently sits third in the overall point standings.

Joining Deukmedjian will be 2020 podium winner Viktor Anderson. Looking to turn his misfortune around where a gearbox issue in qualifying at Road Atlanta made for a difficult weekend, Anderson is fully focused on the front of the grid, the podium and gaining maximum points this weekend to claw himself back into the title hunt.

Emily Linscott will look to better her personal best finish of eighth at Road Atlanta this weekend at Road America. Advancing six positions on track in race three with a fantastic effort, Linscott battled challenging conditions to work her way forward and score her first F4 Championship points.

Testing with Kiwi Motorsport in the past but forced to miss the 2020 season due to COVID travel restrictions, Gabriel Fonseca will join the Texan squad in his quest for race wins. Coming to the series with Formula Delta experience now under his belt, Fonseca showed top-ten pace at the opening weekend and currently sits eighth in the overall Drivers’ Championship.

Making his F4 United States Championship Powered by Honda series debut, Joseph Daniele will join the Kiwi Motorsport roster in the Elkhart Lake region. Making the move to cars after many years of karting, Daniele has his goals set for the weekend at Road America.

“We are looking forward to getting on track at Road America,” explained Kiwi Motorsport’s Teena Larsen. “It is a little bit of a different weekend for us with races on Monday but a win on that day is the same as winning on Sunday so that is the goal.”