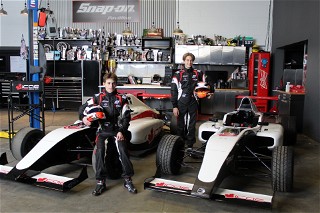 It is with a very promising duo that the ICAR Complex founded the ICAR Canada Racing Team; Justin Arseneau and Louka St-Jean, two young Quebec athletes.

The drivers, both 15 years old, will participate in the Formula 4 United States Championship Powered by Honda starting in March 2021.

The approved practice will take place in Virginia on March 8th and 9th, in preparation for the first round, which will be held at the Michelin Raceway Road Atlanta from March 25th to 28th.

The drivers
Justin Arseneau is well known in the racing world. Canadian karting champion having made his debut at the age
of 7, he represented Canada several times internationally, including at the Rotax World and FIA Academy Trophy
championships, among other major races.

The year 2020 was significantly challenging for Arseneau, who was about to take a decisive turn in his career.

“The pandemic has slowed me down a bit, but it certainly hasn't stopped me! I trained with the help of simulators
and did a few car races here in Canada. I feel ready and very excited for my debut in F4!"

Louka St-Jean is a rising karting star who already has an impressive track record. He participated brilliantly,
among other races, in the Montreal Cup and the Florida Winter Tour. St-Jean demonstrates great skills and
an undeniable talent for his discipline. His F4 debut with the ICAR Canada Racing Team promises to keep
us on the hook!

“It’s very important for ICAR to be a resource for the young athletes wanting a career in racing. We offer the ideal playground to help them thrive, starting with karting, and then getting into race cars, ”said Marc Arseneau, President of the ICAR Complex and Founder of the ICAR Canada Racing Team.

For any athlete wishing to develop a career in racing, the first steps are indeed at the wheel of a kart. The
ICAR Complex kart track has been thought out and designed by Ben Cooper, three-time karting world
champion. If you are interested in knowing more on the subject, contact Mr. Louis-Philippe Gélinas,
Motorsports Director at the ICAR Complex.