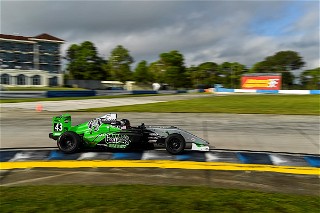 Results did not match speed and renewed energy from Alliance Racing

September 30, 2020 - Taking on the Sebring International   Raceway last weekend and heading to the Homestead-Miami Speedway this weekend, Alliance Racing had a renewed focus, increased energy and great speed as they took on Florida. With Hayden Bowlsbey running in the top-five in speed throughout the weekend and Will Holtz claiming a top-ten finish, Will Edwards also scored his best result of 2020 as the Indianapolis based team is using events this season to prepare for 2021.

Taking the multi-week break between the first and second half of the season to prepare their Ligier JSF4 cars for Sebring, the difference in speed was shown from the moment the lights went out in the first wheel-to-wheel action of the weekend. Hayden Bowlsbey rocketed forward from his fifth place starting position to run in the top-three before near disaster. Taking evasive action to miss a spinning competitor, Bowlsbey spun through the grass narrowly missing the tire wall by inches. Falling to 15th on track, the Alliance Racing driver worked his way back forward to finish seventh, scoring the second fastest lap of the race.

In race two, Bowlsbey was involved in a strange incident on the formation lap that forced the field to pit lane and the start to be aborted. Unable to continue on, the Alliance Racing driver was forced to watch race two from the sidelines before failing to complete the full race distance in race three.

Will Holtz found his way into the points during the final wheel-to-wheel action in Sebring with a tenth-place finish after a pair of thirteenth place results in the first two races. Showing consistency throughout the weekend, Holtz represented Linear Edge, a new partner in his program, with three great results and momentum heading into the next event at the Homestead-Miami Speedway this coming weekend.

Will Edwards nearly scored his first points of 2020 with a strong eleventh place result in round ten. Staying out of trouble and methodically working his way forward, Edwards closed the gap to the lead group and finished less than six tenths of a second from a top-ten.

"While the results do not show the progress that we made this weekend, I think other teams and drivers realized," explained Toney Edwards. "We made some changes to Hayden's program, and they proved to be beneficial as the speed increase was evident. An engine change on Will Edwards also aided in a speed increase while the same increase was seen for Will Holtz. On that side, it was a good weekend but, on the results side, we need to make some improvements there. We will reset our goals for Homestead this weekend and go from there."

With very little time off, Alliance Racing is already on the road south to the Homestead-Miami Speedway. Set to for rounds thirteen through fifteen of the F4 United States Championship Powered by Honda, competitors will hit the track on Thursday for a Promoters Test Day before a full slate of action over the triple-header race weekend.

With several affordable testing opportunities coming up in the next six weeks, Alliance Racing and ADDA have seats available for you.