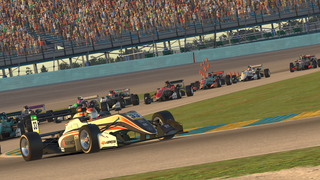 Muhammad Ibrahim added more virtual success in the latest round of the KCR Simulators F4 U.S. Esports Championship hosted on iRacing. The F4 South East Asia racer took pole at the Homestead-Miami Speedway roval, followed by an assured win in the half-hour race.

Jay Howard Driver Development’s Viktor Andersson started second, and was Ibrahim’s closest challenger in the opening laps until the bumpdrafting Quinlan Lall punted him off at Turn 1.

The reigning Formula Nordic champion fell to fifth, but chased down Alessandro De Tullio and Simon Sikes once they started battling later into the race. F2000 Championship Series race-winner Sikes was able to slipstream past De Tullio down the main straight, but the positions would swap again on the indield.

On one occasion it went wrong, with side-on contact being made and Andersson taking fourth from Sikes. In the remaining laps, Andersson started to put pressure on De Tullio and pipped him to third at the finish by 0.003 seconds.

Sikes was fifth, and Esports racer Chase Outcalt had a quiet run to sixth.

Reigning Formula Regional Americas champion Dakota Dickerson elected to start the race from the pits, and charged through the order to finish seventh. His highlight was a to-and-fro battle with Luke Welcome in the last few laps.

Each time he made an audacious move around the outside of Turn 6, Welcome would respond by being late on the brakes at the Turn 8 hairpin to reclaim the position. Eventually Dickerson triumphed, with Welcome dropping back behind Alexander Koreiba.

Lyubov Ozeretskovskaya had strong pace but was the last finisher on the lead lap in 13th, ahead of fastest lap setter and former USF2000 racer Michai Stephens.

The KCR Simulators F4 U.S. Esports Championship returns to action on Tuesday, June 16 at Mid-Ohio Sports Car Course at 6:30 p.m. with a set of new and returning competitors.

The event schedule will include one 10-minute practice, one 10-minute qualifying and one 30-minute race with points following the FIA F4 system.