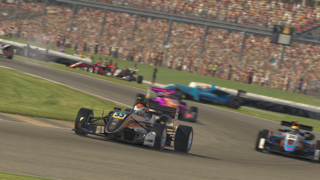 After an intense opening round, the new KCR Simulators F4 U.S. Esports Championship returns to action on Tuesday (June 2 at 6:30 p.m. ET) at Barber Motorsports Park for Round 2 of the new virtual championship.

With entries out numbering the grid spots available, drivers took to the scenic Alabama circuit on Monday evening to pre-qualify for race day. Nearly three dozen current, past and future Formula 4 United States Championship Powered by Honda drivers secured spots for the second of five rounds

Kiwi Motorsport F4 prospect Muhammad Ibrahim dominated the opening round last week, leading every circuit of the 22-lap race. However, tonight, Ibrahim will face several challengers looking to upset him, including Simon Sikes and Viktor Andersson, who both finished in the top-five in the opening round and now trail Ibrahim by a few points in the overall championship.

New to the entry list this week is F4 U.S. graduate and Formula Regional Americas driver Quinlan Lall. Lall finished in the top 10 of the FR Americas iRacing Invitational Championship and ended the pre-race qualifying with the third fastest time. After a sim and equipment upgrade, Lall has his eyes set on the KCR Simulators F4 U.S. Esports Championship.

““Tonight is my first race in the F4 Esports Championship,” explained Lall. “I look forward to getting back into the sim after having a fun FR Americas iRacing championship. This time around I feel more prepared and also have some upgraded equipment. I’ve received my new VR headset and have been putting it to good use, taking two podiums and a race win in the Formula Driver’s Challenge Invitational Series. I hope I can transfer that form into the F4 championship. I can’t wait to have the lights go out tonight.”

In the opening F4 U.S. esports round, Aaron Rouf dodged several incidents on his way from a near last-place start to finish just inside the top-10 in nineth. Advancing a total of 15 positions, Rouf earned the KCR Simulators Hard Charger Award which included a private one-hour iRacing coaching session from three-time champion Dakota Dickerson.

Rouf got a late start to his racing career, turning his first laps at 40 years old. Mostly competing in ovals and in sim competition, Rouf will start open-wheel racing school in 2021 to participate with F4. His time spent with Dickerson, shaved more than one second off his practice time, finishing with the 12th fastest time in pre-race qualifying on Monday.

“The coaching hour I received as the Hard Charger for the first race was invaluable,” said Rouf. “Dakota (Dickerson) is a great coach; he watches, reaffirms and then suggests what can improve. The knowledge of the track and the nuances I gleamed from Dakota was eye opening. As an oval driver, it made me realize that with proper knowledge of a road course or track makes all the difference in the world.  He also broke down my telemetry data, and sent me an email after the session with a summary of places to gain time. The confidence it gave me for this week at Barber and going forward was immense after struggling in Round 1.”

The F4 U.S. partners stepped up in a huge way to offer real-world prizes to the championship drivers. In effort to show the single-seater progression, Global Racing Group will host the iRacing champion for a real-life test day in the Halo-equipped Ligier JS F3 car. The championship prize package also includes an Omologato watch, Bell Helmet Accessories and a Balaclava and 50 percent discount from Sabelt America. The Vice Champion will receive a set of Hankook Tires while third overall in points will be presented with a 90-day virtual training package from PitFit Training.

The driver with the most pole position starts at the end of the season will receive a free entry for a promoter test day from SCCA Pro Racing in 2020 with the driver’s team of choice. After one event, Sikes is in the lead to claim the SCCA Pole Position Award.

Live coverage by Apex Racing TV starts at 6:30 p.m. Eastern with a swift 10-minute qualifying followed by a 30-minute race and featuring “podium” interviews with the top drivers.