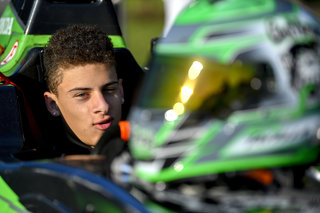 Heading into the second last weekend of the season, my focus had changed from finishing on the overall series championship podium, to gaining as much experience as possible for the 2020 season. Having never been to the Sebring International Raceway before, I took some time to get use to the layout, braking and apex points via my simulator which reaped benefits for my confidence heading into the race weekend.

The track is very bumpy, by far the roughest surface I have ever raced on. The bumps change some entry and exit points to the corner, and they played a major role when it was raining. From the very first session, I found out that the track benefited drivers that were aggressive, so I immediately went on the attack pushing every lap like it was my last lap of the season.

The changing weather conditions made the track treacherous on occasion and very difficult to be consistent. With standing water in some areas and a drying yet damp track in others, visually and mentally, all drivers had to be on their game. This is what I worked on the most in race two as I could see other drivers were having trouble in certain areas of the track. Learning from their mistakes, I was able to drive forward and finish on the podium. Though I had finished on the podium on two other occasions this season, penalties had stripped me from the results so I was very relieved that following the on track action and post-race technical inspection that all was good and that the podium would stand, my first career podium in F4, officially! 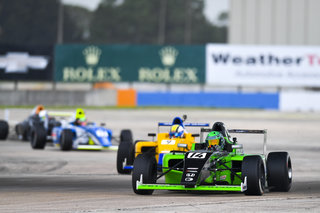 While the track was very cool, the best thing about the weekend was the hotel. To be on the track property and overlook the race circuit provided myself and family a different way of viewing things. Hearing race cars in the morning or watching them from your balcony at lunch is something that I never experienced before. I highly recommend staying at the track hotel to any team or driver that has the opportunity to race at Sebring.

From 2018 to 2019, I feel that I have greatly improved as a driver both on and off the track. A change in teams, eating habits and preparation aid in this improvement, but also having a year’s worth of experience under my belt has helped. I really wanted to fight for the championship this season, but with a few difficult races, that has not happened. I have felt a lot more confident in the car and myself as we have moved through the year and I have learned to take it all in stride and to gain knowledge and experience to better myself for future events and opportunities.

While the racing in the F4 United States Championship Powered by Honda has improved a lot over the past year, I think more seat time for each driver would bring the field closer on the time sheets and allow more inexperienced drivers a great chance to move up the grid. As an entry level series with many drivers coming straight from karting, track time is key. Racecraft can be developed over time but to learn about your team, crew, care, etc, more track time is a necessity.

I only have one more event in 2019 and it is the biggest one of the year. We will be racing alongside the Formula one World Championship at the Circuit of the Americas and if I could only win one race all year, this would be it. My team, Alliance Racing Sponsored by Gas Monkey Energy, will have five drivers in attendance and I am confident in our abilities to battle at the front of the field and prove our skills in front of a world class audience.

Lastly, I would like to thank the F4 United States Championship Powered by Honda staff, Alliance Racing, Gas Monkey Energy and all of my partners for all of their help and continued support. I am excited to finish the year strong and see what 2020 can offer.