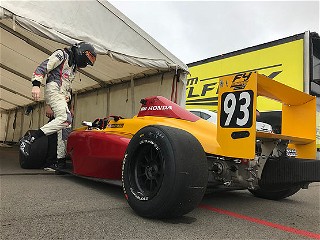 A common misconception about racing is that it is a one-person sport. The driver gets in the car, straps his belts, starts his engine and goes. This cannot be further from the truth!

In fact it would be impossible to run a race with just a driver. Operating a 140+ MPH race car takes quite the team of people. A driver can't even put on his own belts, let alone engineer, assemble and analyze the tires, suspension, engine transmission and chassis. The cockpit of an open-wheel race car is designed to be as small and safe as possible. Between fireproof underwear and socks, a racing suit and shoes, a helmet and a neck restraint device, a driver is already working with limited movement before he gets into a carbon fiber cocoon with six seat belts, three pedals an automated fire suppression system, one steering wheel and seat called a cockpit.

Each driver has the responsibility of choosing the team. It is crucial that the team chosen is fully capable of providing a fast and safe car. Most teams are equipped to do so, but beyond their capabilities drivers must evaluate the personality and environment of a team and ensure that it is the right fit to allow the driver to be themselves and flourish.

My Team - Group A Racing

I am the most fortunate driver on the grid to have my team Group-A racing. Managers and Team owners Jonathan Scarallo and his father "Poppa Joe", Mechanic Chris Long, and Mad Genius/ Engineer Allain are all at my back. My safety, my life and my pace are all in their hands. 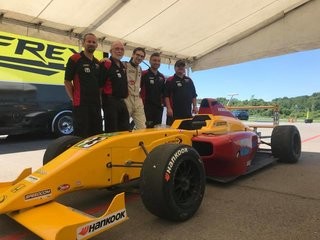 As their driver our performance ultimately falls on my shoulders when I am on the track, but behind the scenes it's all on them to give me a fast and safe car that can take a beating, and boy did it!

A race car has countless minute adjustments. Each individual corner of the car can be adjusted separately. Springs, ride height, tire pressure and the angle of each wheel all affect the car's performance and response. The slightest change can make a massive difference. This is why a race car needs a mathematician known as an engineer. Every driver races each other on track, but every engineer is silently racing off track to find the optimal setup for the coming session's track conditions.

An ideal racing session has a standard procedure, be it testing, practice, qualifying or a race: Arrive at the track, engineer and set up the car for the coming session's weather and track conditions, prepare and strap the driver in the car, wait for the green flag and head out on track. Sounds easy, right? But a good part of racing is being able to adapt to constantly changing conditions. It's rare that everything goes as planned.

Depending on the track's location, weather can turn on a dime, and when a tenth of a second per lap can be the difference between first and fifth, a car needs to be properly adjusted for the condition of the track. This is just one of many reasons why the team, including the driver, is so critical.

Our race weekend at Pittsburgh International Race Complex included two non-competitive test days on the Tuesday and Wednesday before the official competition on Friday, Saturday and Sunday. This provided the teams and drivers more than enough time and practice to get accustomed to the track.

One might think that extra time to prepare for the coming races would make life easier. Drivers get more time to acclimate themselves to the track while the teams have more time to sort through any potential car problems that might present themselves. But racing is tough on the car and the people involved. Every mile on a racetrack is comparable to at least 250 miles on a civilian road because we are pushing the car driver and tires to the absolute limit.

We had a long and grueling week at Pittsburgh International Race Complex. Plagued with torrential rain, mechanical issues and incidental contact with other drivers. But, as a team, we win and lose, work and relax, celebrate and suffer TOGETHER. 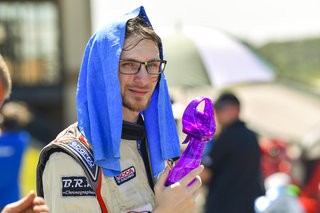 I arrived at the track Tuesday morning to find a forecast of rain throughout most of the day and coming week. Rain does not stop the session or prevent us from going on track, so we were all looking forward to being able to develop a fast and reliable setup best suited to a wet track. However the weather proved to be just as unreliable as the forecast itself!

The test days on Tuesday and Wednesday presented terribly inconsistent weather conditions. From one hour to the next the weather switched between absolute downpour and blue skies. Most sessions saw a mixture of wet and dry track. Some practices even had rain on one half of the track and sun on the other.

The weather conditions were challenging in and of themselves, let alone the unforeseen car troubles that were soon to come. 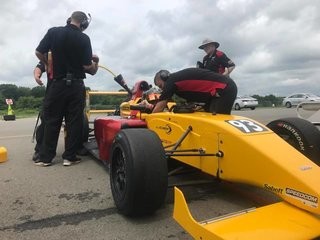 While testing at full speed, we experienced different mechanical issues on different days, one that presented itself on the last session of the final official test day, which meant we had to switch cars heading into the first day of official timed practice.

By Friday the forecast showed blue skies for the rest of the weekend. This meant that all the wet practice and experience gained over the course of the test days went out the window.

With a new car and the weather sorted, we were sure that our troubles were behind us and we could put our heads down and focus on the races ahead. But, during my first practice on Friday, we experienced braking issues. The team had to make the same master cylinder change on the new car. Miraculously the team completed the three-hour job in less than one hour, just in time to make it out to our second practice. Running low on our allocated tires for the weekend, we had to use a set of nearly destroyed tires. All this combined meant that we would head into Saturday morning qualifying with little valuable practice and experience. At least all our car troubles were behind us before the race!

Due to our constant challenges, we did not improve on our results from Road Atlanta where I led a race and scored points in all three races, but we stuck our tough week out together! With new tires and consistent weather I managed to drop an entire second off of my lap time in qualifying putting us in 13th for the grid and a position to go score points.

In Race 1, by the fourth corner I had gained two positions just before a full course yellow flag and safety car, putting us in 11th just outside of the points heading to the restart of the race. At the restart I gained a position exiting the final hairpin. Driving toward Turn 1, I made a pass on the inside for ninth when I went off track on exit, losing my hard-earned place and setting me back a number of positions. I fought back and managed to finish the race in 15th position. 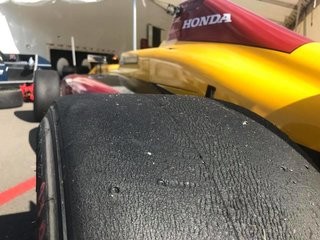 Race 2 I started in 18th on the grid. I fought hard through the field making pass after pass and finished in 11th! We were proud of the overall performance and improvement but frustrated to be so close to the 1st points paying position of 10th.

In Race 3 I started in 15th. I gained a some positions during the first few laps of the race. While working hard to get around the next car, I set up a number of pass attempts on the outside of the final hairpin. On my second attempt, I managed to outbrake my competitor. As I held my outside line and presented my position, the car to the inside ran me off track on exit, sending me into the grass and destroying my progress and results for the final race. After filing a protest with the Steward,s the offending car would receive a 20 second penalty. However, this penalty does not rectify my results.

All things considered, we were proud of the performance but also frustrated that we were so close to scoring another set of valuable points. However, people and teams show more of who they are through trial and tribulation than they do in victory and success. This week we showed our true colors.

We worked unbelievably hard as a team and even though tensions were high we stuck it out together. We pushed through all of our problems and managed to perform despite all the issues we faced.

It's times like these when I am grateful that racing isn't a one man sport. Being able to share exuberance in victory and split the brunt of defeat makes all the difference. I am more than looking forward to Virginia International Raceway now. I have just enough funding to make it to that race. We are doing any and everything in our power to not only make it there but to perform to our highest potential. VIR here we come. Watch out, Group A Racing is on its way. Mid Ohio - You're Next. 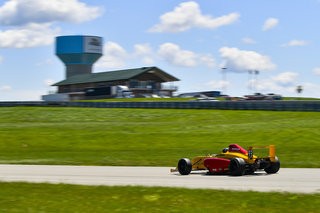 I could not have accomplished this weekend on my own, and I do not intend to win a championship by myself either. I need support as a driver and every day that I breathe I seek as much of that support as I can. I need to thank my family and all the sponsors and partners that have helped me just to get to this point. Their information can be found below. If you're reading this, and would like to get involved in any way, please reach out. I'd love to hear from you.

Certified by the FIA, are the first, and only, domestic, single seater development series with a direct path to the top levels of international motorsports, SCCA Pro sanctions these championships, recognizing the importance of developing tomorrow's racing talent.

Race-craft 1 is a racing simulator training facility and business run by Air-Force Pilot Kelly Jones. Kelly flew The F-16 fighter and applies all that he has learned through his military flight simulation training to help drivers like me develop their skills with racing simulators.

By boosting the brain to its functional best with neurofeedback and proper nutrition, we provide drug-free services for those that suffer from all sorts of symptoms caused by improper brain function, including but not limited to ADHD, Autism, PTSD, Anxiety, Depression, even Concussions! Neurofeedback is a research-proven way to improve your brain function through intensive brain training exercises. Although the technology is quite sophisticated, the process is simple, painless, and noninvasive.

Stuffed is a burger joint from my home-town Montclair that uses 100%, Grass-Fed, antibiotic free meat. The burgers come stuffed with your choice of cheese inside of the meat!

David Porcelli is an official brand ambassador for the 14+ Foundation, which builds schools and orphanages for underprivileged children in Africa.