Blanco Promoted to Third in Round 6 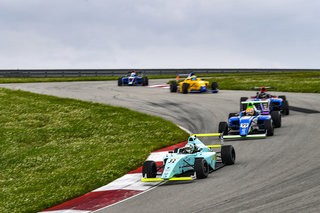 "We are really happy to be promoted to P3 in the last race at PITT," said Blanco. "The pace was great all weekend, and I felt really good in the car. It's a shame that I had my mistake in Race 2 which cost me the win, but those things happen. It's good to know that we leave with at least two podium-finishes now."

"We were very pleased to start off the weekend where we finished off last year, on the podium," said Kiwi Motorsport team principal Garry Orton. "The boys all did a fantastic job and the crew worked very hard on the cars. We have very stiff competition this year probably the strongest competition that the series has had. Everybody, on the team stepped up to the plate and did what we were wanting them to do."

No. 14 failed post-race tech which resulted in Blanco's promotion to third.