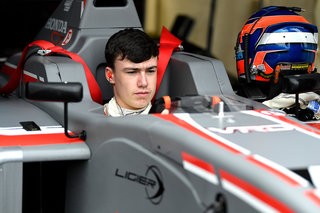 My name is Oliver Clarke. I'm 16 years-old from Norfolk, UK, and I will be providing you with a personal blog throughout the 2019 season, following a hugely successful career in karting.

Time certainly flies in motorsport because it doesn’t feel that long ago that I was getting a deal together to return to the Formula 4 United States Championship Powered by Honda, and now here we are with one event in the books already.

Having stepped up into single-seaters stateside in 2018, the goal was always to return and try and build on what we learned. Thanks to the support of my family we managed to get a deal together with Velocity Racing Development and Fewkes Sport Management for the new season.

Having signed with Fewkes Sport Management in early February, I'm really enjoying working and learning from Will Fewkes. He adds a lot of value to my career with his extensive network and global reputation for actually promoting single-seater championships in Europe himself. I even got the special opportunity to meet Jay Frye, President of IndyCar though him at Barber Motorsports Park which was a huge boost. Simon Pagenaud steps out of the office and I walked in...

With more than 20 drivers on the grid this year, the F4 U.S. Championship is as competitive as ever, but that has been something I’ve always relished as to be the best you have to beat the best.

The opening weekend of the season was a rollercoaster one to say the least as we had to fight back over the three days. Challenging weather conditions ruled out qualifying so practice dictated the starting grid.

Starting from ninth I had high hopes of moving forward and I did on the first lap until my car sparked into flames. Luckily I was able to get out of the car unscathed because the safety Ligier provides is phenomenal.

Everyone at VRD worked tirelessly to ensure we could make it to the grid and I have to say a huge thank you to them. This really is a team sport at the end of the day and they did an amazing job overnight.

Thanks to their hard work I was able to line up at the back of the grid for race two and I managed to work my way up to 11th at the flag. It was a really fun race and sort of reminded me of karting, making every opportunity and overtake count. Hopefully impressing with my race craft in the process.

Due to setting the second fastest time in race two I started on the outside of the front row for the final race of the weekend. Lacking a little tire temperature cost us in the early stages but I brought the car home in fifth which was my best result to-date in the series - it was a nice way to end considering how the event had started.

Since I touched back down in the UK the attention has switched from studying data to studying textbooks as I am currently in the middle of my exams at school.

I’ll be back behind the wheel on June 18-19 ahead of our next round at the Pittsburgh International Race Complex and I can’t wait to get going.