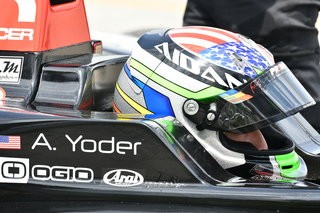 Hi everyone!  I’m excited to write my first blog for the F4 U.S. Championship Powered by Honda while I’m still living off of the hype from scoring my first single seater pole position!

Before the start of the 2019 season, the Primus Racing Team and I had committed to some extensive testing; trying to learn as much about the new Hankook tires as we could before arriving in Atlanta.  Solid seat time and learning opportunities really helped me reach a new level of confidence in myself.  The F4 car is the only high performance race car I’ve ever driven; having previously only raced in karting.  Even then, I had been competing in X30 Senior without a real feel for how engine braking and gear shifting could affect lap time.

The first day at Road Atlanta went relatively smoothly.  This track really takes your breath away.  With over 120ft in elevation change, it truly feels like you’re riding a rollercoaster!  It was fun getting back into the groove; I knew I was pushing the car to a degree that I hadn’t been in the previous year.  We’d opted to use only one set of new tires throughout both practice days, not realizing the impact this would have on my first race.

We woke up Friday to find that the heavens had opened, dumping rain like this California boy had never seen!  Then qualifying was cancelled due to lightning - delivering a massive blow to our team, because now the Race 1 grid would be set on fastest practice lap times, putting us on the back foot as the guys who used new tires every session were naturally able to put up quicker times.  As we all know, new tires = more grip = faster lap times.  Then Race 1 was declared a rain race, there being damp spots scattered about the track.  We were essentially stuck outside the 20’s for the entirety, unable to overtake with the rain tires on a quickly drying track.  I finished the day feeling really bummed with my performance. 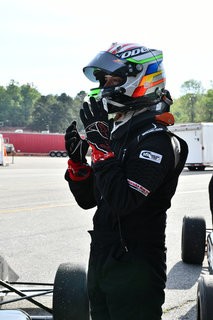 But I woke up on Saturday feeling more pumped than ever, determined to gain redemption.  The track had dried and slick tires went on for Race 2.  I could tell I was going much faster than I was in practice; still, I didn’t feel like I was setting the track on fire.  I knew there was more time to be gained as I grew more comfortable on the new tires.

Next thing I knew, I heard our engineer, Derich Cutshaw, on the radio, “So, right now you have the pole position for Race 3.”  I couldn’t believe it, how could that be?  The race ended and our mechanic, Nick Denny, confirmed, “Alright Aidan, you’re on pole for Race 3!”  With a complete release of emotion, I just kept pumping my fists and shouting into my helmet during the in-lap.

I brought the car to impound, searching for my team and my Dad.  I saw our team owner, Jon Baytos, with an ear-to-ear grin, “About time,” he yelled.  Seeing my unbridled excitement, another mechanic, Peter Drummond, told me to sit down, have some water and calm down before I broke something!  When I finally saw the rest of our team along with my Dad, I ran and jumped on him from behind, screaming “We’re on pole!  We’re on pole!”  After many high fives and a debrief, I called my Mom who was back home.  She was at a literal loss for words.

When Race 3 came, it felt surreal to roll out behind the safety car.  Sure, I had started on pole in karts, but it was nothing like this!  For one, X30 starts are rolling and the leader decides when to go, kind of like our F4 restarts, except double file, with no light sequence to signal the start. 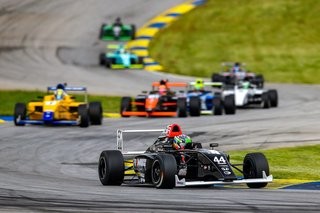 Cars began catching me and we had some small fights.  I fell back to fourth, but just finishing in points was honestly a win for me that week, after all the ups and downs.  The safety car came out and I knew that if I wanted to win, I’d have to go after the last couple laps with full power and no hesitation.

I flew into Turn 1 with my head down, hungrier than ever.  But as I turned the corner, the car snapped me into a 720 degree spin, right into the barriers.

My left rear wheel had failed.  There had been no indication of it starting to give out or I would have stopped immediately.  It was purely a mechanical failure, just one of the unfortunate incidents of racing.  I wasn’t hurt, but my disappointment was palpable.  We’d put in many hours of testing during the off-season and I’d been committed to bringing home a good result for our team.

It was an unfortunate end to a wild week, but there were positives to pull away with.  For one, I set my first F4 pole position! We led several laps, proving we have the speed to run at the front.  I’m really looking forward to building on this momentum in Pittsburgh in June….

I can’t thank our Primus Racing Team enough, for helping me stick with the lead pack.

Thank you all for taking the time to read my blog! See you at the front.