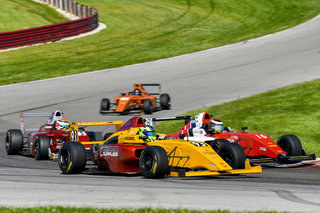 As the first team to commit to the inaugural season, legacy Formula 4 United States Championship Powered by Honda team Group-A Racing took delivery of the first Ligier JS F4 chassis back in 2016. The New York-based team has continued to focus on the core values of the series, developing drivers from karts to cars for the next level of racing.

Since the inaugural season, Group-A has fielded eight rookies and two veteran open-wheel drivers, earning several podiums and special contingency awards like the Sabelt Hard Charger. However, team manager and driver coach Jonathan Scarallo says that while podiums are always nice, that they aren’t always a great tool in measuring success.

“Leaving the weekend without a trophy doesn’t mean a driver didn’t succeed, there’s other ways to measure success. Some of our drivers were inexperienced, starting out near the bottom in results and by the next race, they moved to mid-pack. In F4 that could be a 15-position difference which is a huge accomplishment as a new driver,” Scarallo said. “Our rookies have had massive gains over the course of a season, developing at incredibly rapid rate.”

“We’ve always had at least two drivers who weren’t ready for F4 in the Lucas Formula Race Series as part of our driver development program,” explained Scarallo. “Instead of just throwing them into F4, we take them there to get them very valuable race and seat time to prepare them for the next step. Coaching our drivers in the series speeds up the learning curve. We also provide driver management, helping them make the step up at the correct time and working with them on the marketing and funding side.”

The Lucas Oil School of Racing noticed Group-A’s operation efforts and selected the team as its premier open-wheel test team, utilizing the squad’s three decades of experience to host the Lucas Oil Formula Race Series champion in a one-day test.

“For the Lucas Oil School of Racing committee to choose us to be involved by hosting its series champion’s test is a tremendous privilege and compliment to our team,” said Scarallo. “We always look forward to having the series champion test with us. They have an opportunity to work with our lead engineer Alain Clarnival, who has decades of experience of winning races and championships in both ladder system and pinnacle motorsports. It’s also a great opportunity for the driver to experience the next level up in terms of horsepower and grip, while working with us in terms of feedback and car setup. We’re also extremely excited because this season the winner has the choice of an F4 scholarship as the championship prize.”

The Lucas Oil Formula Race Series champion can decide from one of three grand prizes, including a scholarship valued at $50,000 to enter F4 U.S. in 2020. The champion will test in his or her choice of an F4 car or one of Group-A Racing’s other open-wheel seats, depending on the scholarship chosen, at MSR Houston. 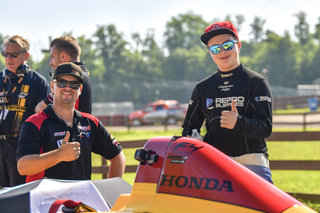 In effort to complete its two-car F4 U.S. lineup, the team has completed a series of evaluations with prospective drivers for the upcoming season at its winter-base in Texas.

“Our South African driver Cameron O’Connor wasn’t able to return for his sophomore season to capitalize on everything he learned in his rookie year because travel started conflicting with school. This left both our seats open for this season,” Scarallo explained. “We’ve also secured new sponsorship that helped created more affordable driver packages without sacrificing performance or customer service.”

The fourth F4 U.S. season kicks off April 18-20 at Road Atlanta. For more information about the championship visit F4USChampionship.com. For testing opportunities with Group-A Racing, contact Jonathan Scarallo at GroupARacing@aol.com.