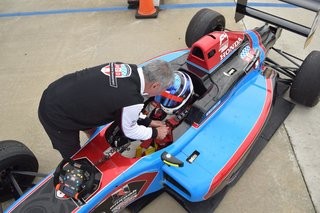 Danish single-seater driver Christian Rasmussen joins the Jay Howard's Driver Development 2018 line-up. Hot on the heels of his third place overall finish in the 2017 Danish F4 Championship, the 17-year-old from Copenhagen is now hungry for success on American soil. Rasmussen is the fourth driver to commit to JHDD for a season campaign.

“My goal in motorsport is to become a professional racing driver," said Rasmussen. "I want to live by doing what I love the most, which is driving a race car. The F4 United States Championship will develop my skills and make a big step on this career path.”

Prior to driving in F4 with Magnussen Racing Experience in 2017, Rasmussen made a successful debut in open-wheel in the Danish Formula Ford Championship in 2016. In his inaugural year, he became Vice Champion and set a new track record at Ring Djursland.

But it was karting from the age of six that initially led to Rasmussen’s passion for driving. Firstly from indoor karting, then in club races as a Cadet Junior and subsequently in National and International races in Europe.

In 2015, he dominated the National karting series and won everything he participated in, including the Danish Super Kart and Northern European Championships. He also raced in the CIK-FIA European Championship in Kristianstad, Sweden, and the Trofeo Andrea Margutti in Italy.

“Christian was on it from the moment he got in our car, it was clear he had a good feeling for the car, experience and very fast," said JHDD Team Principal and Indy 500 veteran Jay Howard. "He immediately became acclimated with the program, made a good impression and has been a perfect fit for the team.”

Rassusen also a selected member of Team Danmark Elite Athlete – an organization working alongside Denmark’s 28 sports federations to recruit, support and develop talent. When he’s not racing  is a second-year student at Niels Brock HHX which supports him in pursuit of his chosen sport while enabling him to continue his studies.

Rasmussen continued, “I like the atmosphere in the team, and I get along very well with everybody. Our pre-season testing has been very promising and I think that we are in a very good position to fight for the championship. I look forward to the season opener at VIR.”

Rasmussen joins Braden Eves of Gahanna, Ohio, and rookie drivers Wyatt Brichacek of Denver, Colorado, and Teddy Wilson of Rutland, UK, in the Jay Howard Driver Development
F4 team, which was launched three years ago alongside the established kart team of veteran IndyCar driver Howard. With his team of experts, Howard offers the highest level of support to young drivers looking to progress into single-seaters and provides a wide range of Trackside and Management Services.

About Christian Rasmussen
Christian Rasmussen from Copenhagen in Denmark began driving karts at six and moved into single seaters aged 15. He is a Team Danmark Elite Athlete and was third in the 2017 Danish F4 Championship.

Jay Howard’s Driver Development is the team of IndyCar driver Jay Howard. A former national karting and single seater champion in the UK, British born Jay moved to the USA in 2005. He has competed in the Verizon IndyCar Series and Indianapolis 500 and was 2005 US Formula Ford Zetec champion and 2006 Firestone Indy Lights champion. Jay’s mission is to mentor young drivers to prepare them for the top levels of the motorsport ladder. www.jayhoward.com
FIA Formula 4 was launched in 2014 as a globally recognized step between karting and F3. In 2015 the Formula 4 United States Championship Powered by Honda was born. With Formula 1-style standing starts; points from 1st to 10th, and FIA Super License points at stake, the Championship is a proving ground for the next generation of racers. www.f4uschampionship.com