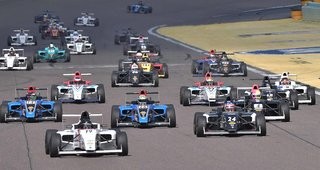 History will be made as the Formula 4 United States Championship Powered by Honda returns to Virginia International Raceway April 27-29 with a record-breaking 37 entries for the Andy Scriven Memorial Race weekend, shattering the previous 34-car record set in 2017. Last year during its 20-race season, the F4 U.S. field averaged 32 cars.

The 37-car grid is more diverse than ever before, comprised of 22 rookies and 15 returning F4 U.S. drivers, representing 12 states and 10 countries.

“We are extremely pleased to return to Virginia International Raceway with such a strong field of drivers,” SCCA Pro Racing Vice President Steve Oseth said. “After announcing the F3 Americas Championship at COTA last October, we thought we would see a dip in entries as drivers graduated from F4 to F3. On the contrary, since the announcement, we’ve seen a boom in interest in both F4 U.S. and F3 Americas. The continued series growth is a testament to F4 U.S. remaining the most economical series in the United States for drivers who want to progress their open-wheel racing careers.”

Racing backgrounds across the field are vastly different this season. The grid spans from drivers graduating from karts to cars like Eduardo Barrichello, Dylan Tavella, Arthur Leist and Teddy Wilson, to former sprint-car and Legend drivers like Will Edwards, to seasoned open-wheel veterans like Steve Bamford and Jim Goughary Jr.

"All the competitors entered are very talented,” said Oseth. “Fans should expect to see intense wheel-to-wheel racing from the front of the grid to the back. It is going to be an exciting season of close competition.”

The F4 U.S. drivers will participate in a promoter test day on Thurs., April 26, followed by two practices on Friday. Qualifying and Race 1 will be held on Saturday, and the weekend will conclude on Sunday with the final two rounds of competition. Fans can view the full schedule and entry list at F4USChampionship.com.