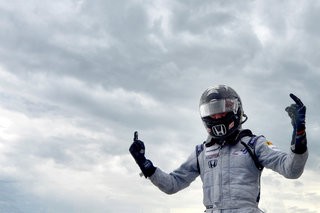 Kirkwood seized fast-lap times in both practices and all three races, claiming pole position for each of the rounds held on Sunday. The international final victory marked the sixth consecutive race Kirkwood has found the top of the podium. The success at CTMP also bumped the Cape Motorsport driver to first-place in standings, passing Timo Reger of San Antonio, by 31 points.

“Even under wet-track conditions, we were running just a half second slower than my fastest lap time of the weekend,” Kirkwood said. “I have full trust in my team, Cape Motorsports, and my strategy has just been keep my car on the track. It feels amazing to come away with another weekend sweep.”

Prior to the start of Round 9, rain created wet track conditions. The rain ceased before the start of the race, but was forecasted to resume minutes into the final race. Teams were given the option to choose to equip their cars with Pirelli PZero slicks or wets. Denver natives Blake Mount and Ben Waddell, and Lawson Nigel of Fort Worth, Texas, exchanged their slicks for wets.

Due to the rain, the F4 U.S. drivers participated in their first rolling start of the season. An F1-style standing start is the traditional start for the series unless weather or other on-track circumstances prohibits the drivers from doing so.

Kirkwood, driving the white No. 8 F4 U.S. car, got the jump on front-row contender Dakota Dickerson of San Diego, and never conceded his first-place position. Starting fourth and fifth, Baltazar Leguizamon of Buenos Aires, Argentina, and Jordan Sherratt of Durban, South Africa, also had a fantastic start off the green. Sandwiching themselves around third-place starter Reger, the pair overtook the JDX Racing pilot before the first turn and held him off for the duration of the race.

Heavy rain moved in half-way through the final round, causing limited visibility and water collection in turns. An unfortunate shut by Vaccaro going into Turn 3, brought a full-course yellow. The safety car emerged onto the track to pace the F4 U.S. cars and would stay out for the interval of the race, finishing the final round of the weekend under a yellow.

“I had a lot of fun in the F4 U.S. car,” series-newcomer Dickerson said. 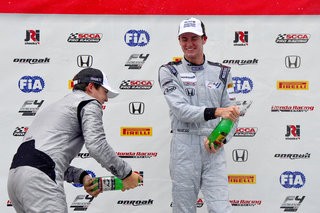 “There were so many learning opportunities with the standing starts and the number of cars on the field. This last race we went out on slicks with a higher downforce setting to help with the wet conditions. Even though the track was dry most of the race, we were still on pace and were ready for the downpour at the end. I’ll be back for the next race and hopefully give Kiwi Motorsport a P1 finish.”

MVL Motorsports pilot Leguizamon scored his first podium of the season with a third-place finish. Jonathan Scarallo of Smithtown, New York, had a solid race weekend, claiming the JRi Shocks Hard Charger Award with 18 forward progression changes for the event.

The second race of the weekend was riddled with cautions, providing only six green-flag racing laps. The top-6 positions didn’t see much movement, and Kirkwood, Dickerson and Jacob Loomis of Corinth, Texas, would start and finish in their starting positions under a yellow flag.

The F4 U.S. Championship will meet next at Mid-Ohio Sports Car Course in Lexington, Ohio, Aug. 11-12 for the Mid-Ohio 200, running alongside Trans Am and NASCAR Xfinity as the secondary series.