Kirkwood 'Turns It Around' in Indy 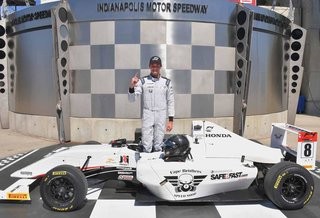 The last moments of Round 4 of the Formula 4 United States Championship Powered by Honda at Indianapolis Motor Speedway grew more intense by each closing lap. With several position changes in the last moments, spectators watched closely to see which F4 U.S. drivers would cross the yard of bricks in the top-three.

Kyle Kirkwood of Jupiter, Florida, dominated Indianapolis Motor Speedway on Saturday. Kirkwood started on the pole after stealing fast-time on the closing lap from Braden Eves of Gahanna, Ohio, in qualifying. The Cape Motorsports driver never conceded his first-place position, leading to his first victory since the inaugural season at Mid-Ohio Sports Car Course. Series newcomer Eves and Ben Waddell of Denver rounded out the top-three.

“Taking home a win at one of the most historic venues in motorsports is a dream come true,” Kirkwood said. “We really turned it around after our struggles from penalties at Homestead. My team, Cape Motorsports, couldn’t have given me a better car. We hope to leave Indy with a clean sweep.”

During Lap 2, Steve Bamford of Toronto, spun in Turn 8. Cars directly behind him avoided contact, however, John Andrew Entwistle of Katonah, New York, tangled with Bamford, taking Blake Mount of Denver with him in collateral damage. A full-course yellow would remain out until just under six minutes remained in the 30-minute session.

Kirkwood got the jump on off the restart on Timo Reger of San Antonio, Texas. Going into Turn 1, Reger would try to draft off Kirkwood but Kirkwood  defended the inside line, forcing Reger to the outside. The pair went into the turn side-by-side with the No. 8 car winning the battle. Reger would spend the remaining laps trying to catch Kirkwood, but an unfortunate last lap shunt in Turn 12 caused Reger to spin, resulting in a P23 finish for the JDX Racing driver.

Eves, who never competed in a car until Indy, looked like a seasoned-professional, picking off competitors one-by-one in the final laps. The No. 41 Jay Howard’s Motorsports Driver Development pilot capitalized on Reger’s error, capturing second.

“It feels great to see success so early on in my first ever car race,” Eves said. “We will be pushing for the win Sunday. Thank you to my team and to my sponsor Addison Holdings, LLC who worked so hard getting me here.”

Jonathan Scarallo of Smithtown, New York, made a daring move on the penultimate lap, going three-wide on the outside of Turn 1. Scarallo’s overtake was successful which resulted in a P3 finish. However, the Group-A Racing car was disqualified after failing to pass post-race tech. Waddell was then presented with the third-place finish.

“Of course, this is not the way I want to get a podium,” said the JDX Racing competitor. “We are starting P7 for Race 2 on Sunday. I’m confident that fans will see me on the podium again this weekend.”

A field of 30 F4 U.S. cars will take the track again on Sunday for the final two rounds at Indianapolis Motor Speedway. Fans can watch live timing and scoring for the event on F4USChampionship.com. 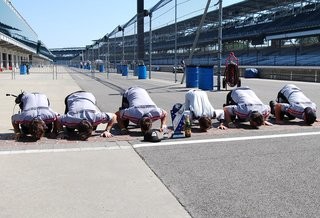