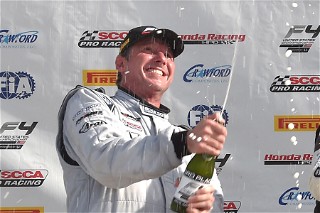 Jim Goughary Jr. makes another run at a perfect season

Dodging incidents, clearing traffic and crossing the finish line in the top-10 in 18 consecutive Formula 4 United States Championship Powered by Honda races has earned James (Jim) Goughary Jr. of Jupiter, Florida, points in every F4 U.S. round since the series’ inaugural season. No other championship competitor shares this honor.

“My experience plays a large part in being able to be so consistent,” said two-time Sports Car Club of America National Champion Goughary. “My goal every time I step into a car is to win, but circumstances sometimes prevent that from happening. Making good in-race decisions to finish only comes from experience, and a bit of luck. There is no way I could race at this level without Jon Baytos, Nick Denny, Billy Wood and Derich Cutshaw from Primus Racing.”

In 2016, Goughary was the only driver to attain points in every race. The 48-year-old completed his rookie F4 U.S. season with one win at New Jersey Motorsports Park and two additional podium visits to finish fourth in the final standings.

The No. 4 Primus Racing pilot’s consistency carried over to his sophomore season. Goughary went on to score points in each of the first three rounds in the 2017

F4 U.S. points are calculated based on FIA rules and regulations. The top 10 drivers in each race are awarded 1 to 25 points depending on their placement. At the end of the season, the top seven drivers will be awarded FIA Super License Points to aid in their racing career advancement to Formula One. The F4 U.S. Championship is the only junior racing series in the United States to offer its competitors FIA Super License points.

“The F4 U.S. series is a tremendous challenge to any driver,” Goughary said. “Running at the front with the amount of raw talent involved, really means something to me.”

Goughary takes the track again at Indianapolis Motor Speedway June 10-11 with the goal to claim his first win of the season at the historical track. For full standings, click here.