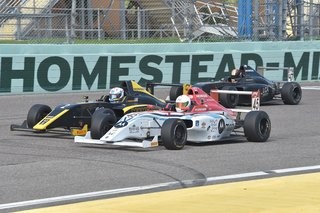 Homestead-Miami Speedway will play host to the Formula 4 United States Championship Powered by Honda on April 8-9 in a joint event with the Trans Am Series presented by Pirelli. The pair will bring high-energy SCCA Pro road racing to South Florida in one weekend.

The event will include a field of 30 or more open-wheel cars from F4 U.S. Championship in its season debut and Trans Am will feature competition in each of the TA, TA2, TA3 and TA4 classes with more than 60 cars participating.

The F4 U.S. series will have two rookie participants who hail from South Florida in the event. Jamaican driver Justin Sirgany, who resides in Miami, will be competing for Global Racing Group, while Vincent Khristov of Delray Beach will be racing for Indy Motorsport Group. Jupiter residents and returning F4 U.S. competitors, Jim Goughary Jr. from Primus Racing and Kyle Kirkwood from Cape Motorsports, are also slated to compete.

General admission tickets are available for purchase in advance of the event at www.homesteadmiamispeedway.com for $10 on Saturday and $15 on Sunday. Two-day passes can also be purchased online for $20.

General admission tickets will be available at the gate on the day of the event. Infield tickets are $15 on Saturday and $20 on Sunday. Two-day passes purchased at the gate are $25. Children 12 years and younger are admitted for free on both days. Parking is free all weekend and will be located in the infield on Main Street and Road Course South (east portion).