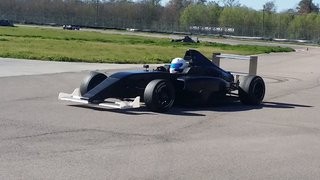 Teams started arriving at NOLA Motorsports in Avondale, Louisiana, around 6:30 a.m. The temperature was a perfect 72 degrees with 52 percent humidity.

7:10 a.m. Drivers and teams took street vehicles around the track to familiarize themselves with the circuit.

The first morning test session began at 7:17 a.m. Seventeen of the 18 competitors practiced. The first session was quickly called red as Austin Kaszuba of Burleson, Texas, found himself off-track. Kaszuba was extracted and would not return to the course until Day 2. The rest of the test remained without incident. Official times were not recorded.

At 10:30 a.m. drivers started their first of ten hours of educational seminars for the season. SCCA Steward Chip Robinson, SCCA Pro Racing Vice President Steve Oseth and HPD Commercial Motorsports Manager Jeff Barrow outlined the season educational component for the 2017 F4 US Championship. Drivers are now required to spend 10 hours furthering their racing knowledge in areas like FIA anti-doping regulations, sponsorship, brand management, safety, engineering and the history of motorsports along with attending various conferences that will be offered throughout the season. The education requirement will assist young drivers to become well-rounded athletes preparing them to move on to the next stages of racing once the season concludes.

A four-hour break separated the first and second F4 U.S. test session. The second test session started at 2 p.m. Seventeen competitors returned for session two. The start lights were operational for one hour for standing start practice. Most newcomers to the series practiced starting. As drivers started to really test the limits of their F4 U.S. cars, several red flags would be thrown. Steve Bamford of Toronto, was towed to the pits after running out of gas testing fuel mileage runs. Victor Khristov of Delray Beach, Florida, lost an engine cover causing a yellow. Close to the end of the day, Kent Vaccaro of Plattsburgh, New York, and Jack William Miller of Westfield, Indiana, had separate off-track incidents which caused them to retire to the pits for the rest of the session. Official times were not recorded.

Max Peichel, F4 US Rookie, Jay Howard MDD- I had a great first day during the official F4 U.S. test. I learned new skills and met a lot of nice people within the series. I feel more confident driving and I am ready for the season to start.

Davis Durrett, Indy Motorsport Group- Being back another year for F4 gives me more confidence to win the championship. Last year was a great learning experience for me, so I’m only hoping for the best this season.

Teams started arriving at NOLA Motorsports Park around 7:30 a.m. The temperature was 68 degrees with 52 percent humidity and a slight breeze.

Testing began promptly at 8:00 a.m. Sixteen of the 18 cars participated in the first half of Session 3. Cars 16 and 40 were being repaired from incidences that happened at the end of Day 1. Both drivers (J. Miller and Vaccaro) returned to the track before the end of the day. Red flags were thrown after Kaszuba, Davis Durrett of Carmel, Indiana, and Baltazar Leguizamon of Buenos Aires, went off-track in separate incidents. Official times were not recorded.

At 12:45 p.m. the drivers participated in a Mardi Gras themed photo shoot.

Only one hour separted the test sessions for the day. All 18 drivers participated in Session 4. The start lights were available for standing starts during the session. Cars were back and forth on the track several times throughout the session testing different set-ups. Leguizamon ended his day after an off-track excursion. Official times were not recorded.

Sam Paley, F4 US Rookie, Jay Howard MDD- I feel confident coming out of my first official F4 US test. I showed speed and the car felt great. I believe I can compete up front this year.

Austin Kaszuba, Miller Vinatieri Leguizamon Motorsports- I got a little greedy Satrurday, but I'm glad I made the mistake early in the weekend so I could still salvage the rest of the test. The team was quick to fix my car and get me back on the track. We learned a lot about the car this weekend and made a lot of progress. It was also really cool to see so many new faces.